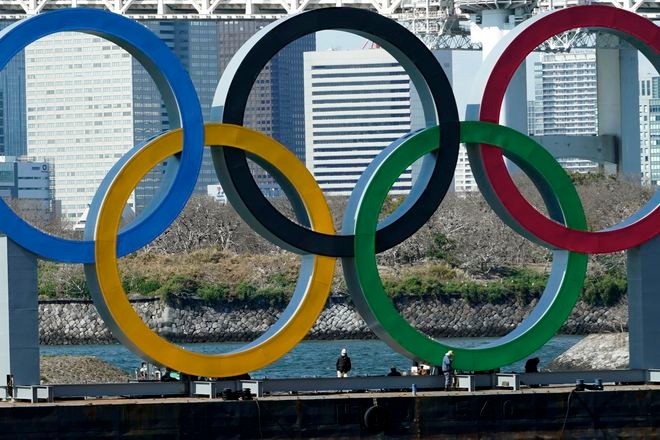 Workers stand at the bottom of the Olympic rings at Tokyo's Odaiba district on March 24. (AP Photo)

With concerns rising about the coronavirus epidemic, a survey found that an overwhelming number of Tokyo residents support postponing the Olympic Games scheduled to start in July.

A random telephone survey March 21-22 of eligible voters in Tokyo by The Asahi Shimbun found that 73 percent of residents favor a postponement of the 2020 Tokyo Olympics and Paralympics while 15 percent want the Games to go ahead “as scheduled,” with 9 percent saying the sports extravaganza should be canceled altogether.

A nationwide survey conducted by The Asahi Shimbun a week earlier from March 14 to 15 found that 63 percent of residents support a postponement.

Voters were also asked to rate Tokyo Governor Yuriko Koike's leadership in tackling the coronavirus issue. Twenty-two percent said she “shows” her leadership while 65 percent said that she “does not show” it.

Even among Koike's support groups, 56 percent felt she “does not show” her leadership.

With regard to the Tokyo gubernatorial election scheduled to be held this summer, 45 percent wanted Koike to continue in the job, while 29 percent said she should be replaced.

In 2016, Koike ran as an independent to defeat a candidate backed by the ruling Liberal Democratic Party and one fielded by opposition parties, to clinch the race for a new governor of Tokyo, her first experience in the job.

Among LDP supporters, 47 percent backed her track record in the job.

The survey showed that among those whose political affiliation is with opposition parties, more backers of the Constitutional Democratic Party of Japan preferred her to stay on rather than to be replaced, while more Japanese Communist Party supporters hoped she will be replaced.

Another issue taken up by the survey concerned a push by Tokyo to open integrated resorts that include casinos. Seventy-three percent of voters opposed the plan while 21 percent supported it.

Telephone numbers for the survey were randomly created by computer. Valid responses by landline came to 1,065, or 60 percent of the 1,770 households with an eligible voter contacted.