How South Korea Flattened the Curve 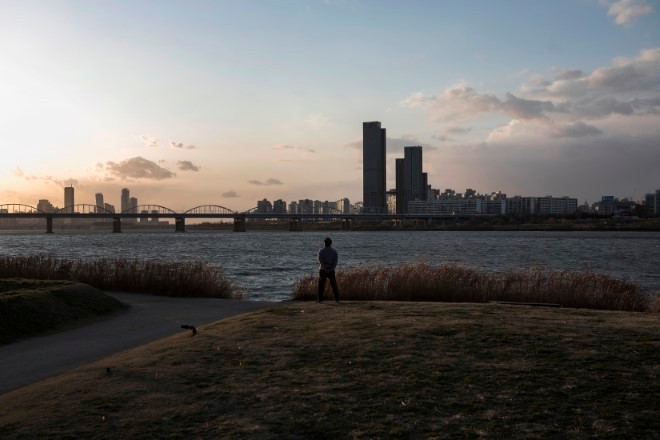 A person watches the sunset in Seoul, March 17, 2020. South Korea showed that it is possible to contain the coronavirus without shutting down the economy, but experts are unsure whether its lessons can work abroad. (Woohae Cho/ © 2020 The New York Times)

No matter how you look at the numbers, one country stands out from the rest: South Korea.

In late February and early March, the number of new coronavirus infections in the country exploded from a few dozen, to a few hundred, to several thousand.

At the peak, medical workers identified 909 new cases in a single day, Feb. 29, and the country of 50 million people appeared on the verge of being overwhelmed. But less than a week later, the number of new cases halved. Within four days, it halved again--and again the next day.

On Sunday, South Korea reported only 64 new cases, the fewest in nearly a month, even as infections in other countries continue to soar by the thousands daily, devastating health care systems and economies. Italy records several hundred deaths daily; South Korea has not had more than eight in a day.

South Korea is one of only two countries with large outbreaks, alongside China, to flatten the curve of new infections. And it has done so without China’s draconian restrictions on speech and movement, or economically damaging lockdowns like those in Europe and the U.S.

As global deaths from the virus surge past 15,000, officials and experts worldwide are scrutinizing South Korea for lessons. And those lessons, while hardly easy, appear relatively straightforward and affordable: swift action, widespread testing and contact tracing, and critical support from citizens.

Yet other hard-hit nations did not follow South Korea’s lead. Some have began to show interest in emulating its methods--but only after the epidemic had accelerated to the point that they may not be able to control it any time soon.

President Emmanuel Macron of France and Prime Minister Stefan Löfven of Sweden have both called South Korea’s president, Moon Jae-in, to request details on the country’s measures, according to Moon’s office.

The head of the World Health Organization, Tedros Adhanom Ghebreyesus, has hailed South Korea as demonstrating that containing the virus, while difficult, “can be done.” He urged countries to “apply the lessons learned in Korea and elsewhere.”

South Korean officials caution that their successes are tentative. A risk of resurgence remains, particularly as epidemics continue raging beyond the country’s borders.

Still, Scott Gottlieb, a former commissioner of the Food and Drug Administration, has repeatedly raised South Korea as a model, writing on Twitter, “South Korea is showing COVID-19 can be beat with smart, aggressive public health.”

Within two weeks, though South Korea’s confirmed cases remained in the double digits, thousands of test kits were shipping daily. The country now produces 100,000 kits per day, and officials say they are in talks with 17 foreign governments about exporting them.

Officials also swiftly imposed emergency measures in Daegu, a city of 2.5 million where contagion spread fast through a local church.

“South Korea could deal with this without limiting the movement of people because we knew the main source of infection, the church congregation, pretty early on,” said Ki Mo-ran, an epidemiologist advising the government’s coronavirus response. “If we learned about it later than we did, things could have been far worse.”

South Koreans, unlike Europeans and Americans, were also primed to treat the coronavirus as a national emergency, after a 2015 outbreak of Middle East respiratory syndrome in the country killed 38.

The coronavirus is thought to have a five-day incubation period, often followed by a period of mild symptoms that could be mistaken for a cold, when the virus is highly communicable. This pattern creates a lag of a week or two before an outbreak becomes apparent. What looks like a handful of cases can be hundreds; what looks like hundreds can be thousands.

“Such characteristics of the virus render the traditional response, which emphasizes lockdown and isolation, ineffective,” said Kim Gang-lip, South Korea’s vice health minister. “Once it arrives, the old way is not effective in stopping the disease from spreading.”

South Korea has tested far more people for the coronavirus than any other country, enabling it to isolate and treat many people soon after they are infected.

“Testing is central because that leads to early detection, it minimizes further spread and it quickly treats those found with the virus,” Kang Kyung-wha, South Korea’s foreign minister, told the BBC, calling the tests “the key behind our very low fatality rate as well.”

Though South Korea is sometimes portrayed as having averted an epidemic, thousands of people were infected and the government was initially accused of complacency. Its approach to testing was designed to turn back an outbreak already underway.

To spare hospitals and clinics from being overwhelmed, officials opened 600 testing centers designed to screen as many people as possible, as quickly as possible--and keep health workers safe by minimizing contact.

At 50 drive-thru stations, patients are tested without leaving their cars. They are given a questionnaire, a remote temperature scan and a throat swab. The process takes about 10 minutes. Test results are usually back within hours.

Relentless public messaging urges South Koreans to seek testing if they or someone they know develop symptoms. Visitors from abroad are required to download a smartphone app that guides them through self-checks for symptoms.

Offices, hotels and other large buildings often use thermal image cameras to identify people with fevers. Many restaurants check customers’ temperatures before accepting them.

When someone tests positive, health workers retrace the patient’s recent movements to find, test--and, if necessary, isolate--anyone the person may have had contact with, a process known as contact tracing.

This allows health workers to identify networks of possible transmission early, carving the virus out of society like a surgeon removing a cancer.

“We did our epidemiological investigations like police detectives,” Ki said. “Later, we had laws revised to prioritize social security over individual privacy at times of infectious disease crises.”

As the coronavirus outbreak grew too big to track patients so intensively, officials relied more on mass messaging.

South Koreans’ cellphones vibrate with emergency alerts whenever new cases are discovered in their districts. Websites and smartphone apps detail hour-by-hour, sometimes minute-by-minute, timelines of infected people’s travel--which buses they took, when and where they got on and off, even whether they were wearing masks.

People who believe they may have crossed paths with a patient are urged to report to testing centers.

South Koreans have broadly accepted the loss of privacy as a necessary trade-off.

People ordered into self-quarantine must download another app, which alerts officials if a patient ventures out of isolation. Fines for violations can reach $2,500.

By identifying and treating infections early, and segregating mild cases to special centers, South Korea has kept hospitals clear for the most serious patients. Its case fatality rate is just over 1 percent, among the lowest in the world.

There aren’t enough health workers or body-temperature scanners to track everybody, so everyday people must pitch in.

“This public trust has resulted in a very high level of civic awareness and voluntary cooperation that strengthens our collective effort,” Lee Tae-ho, the vice minister of foreign affairs, told reporters earlier this month.

Officials also credit the country’s nationalized health care system, which guarantees most care, and special rules covering coronavirus-related costs, as giving even people with no symptoms greater incentive to get tested.

IS THE KOREAN MODEL TRANSFERABLE?

For all the attention to South Korea’s successes, its methods and containment tools are not prohibitively complex or expensive.

Some of the technology the country has used is as simple as specialized rubber gloves and cotton swabs. Of the seven countries with worse outbreaks than South Korea’s, five are richer.

One is political will. Many governments have hesitated to impose onerous measures in the absence of a crisis-level outbreak.

Another is public will. Social trust is higher in South Korea than in many other countries, particularly Western democracies beset by polarization and populist backlash.

But time poses the greatest challenge. It may be “too late,” Ki said, for countries deep into epidemics to control outbreaks as quickly or efficiently as South Korea has.

China turned back the catastrophic first outbreak in Hubei, a province larger than most European countries, though at the cost of shutting down its economy.

South Korea’s methods could help the U.S., though “we probably lost the chance to have an outcome like South Korea,” Gottlieb, the former FDA commissioner, wrote on Twitter. “We must do everything to avert the tragic suffering being borne by Italy.”