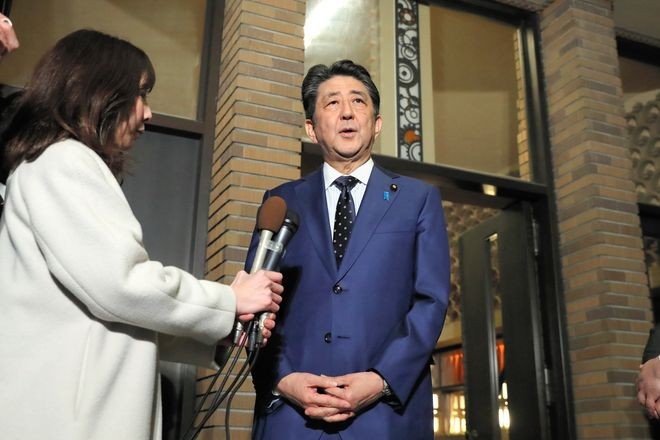 Prime Minister Shinzo Abe talks to journalists in front of the prime minister's residence in Tokyo on March 24. (The Asahi Shimbun)

Japanese Prime Minister Shinzo Abe said on Tuesday that he and International Olympic Committee head Thomas Bach had been in full agreement on the need to postpone the Tokyo Olympics for about a year.

Abe said he requested the postponement "to make it possible for athletes to play in the best condition, and to make the event a safe and secure one for spectators.

"President Bach said he is in agreement 100 percent."

Tokyo had completed preparations when the virus started spreading across the world.

Global pressure to postpone the July 24-Aug. 9 event has swelled in recent days.

No Summer Olympics had previously been postponed, though Games did not take place in 1916, 1940 and 1944 as planned because of war.

The coronavirus outbreak, which has infected more than 350,000 people worldwide and killed more than 15,000 deaths, has played havoc with sporting events across the world.