Tokyo now the hot spot for virus infections with 171 cases 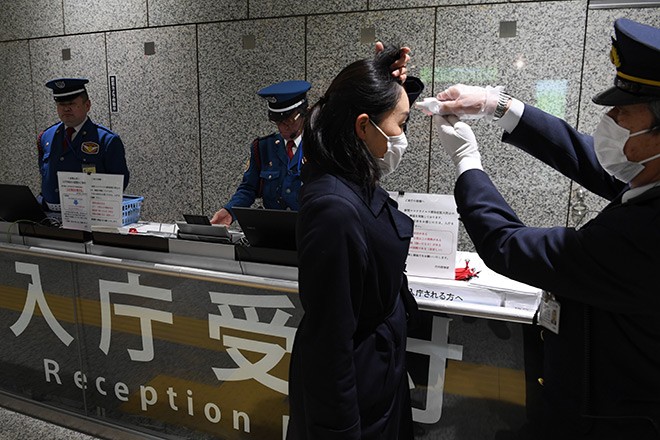 Visitors to the Tokyo metropolitan government have had their body temperatures checked in the reception area of the building since March 4. (Asahi Shimbun file photo)

Tokyo on March 24 became the nation's top spot for coronavirus infections with 171 confirmed cases, overtaking Hokkaido, which has 163.

There were 71 confirmed new cases nationwide as of 11 p.m. Tokyo confirmed 17 new infections.

Health authorities said a total of 1,923 people had been infected in Japan to date. The death toll from the virus now stands at 53.

In the period between March 23 and 24, a nurse in her 30s and three patients in their 60s and 70s tested positive at a general hospital in Tokyo’s Taito Ward.

The ward office is attempting to trace the infection routes.

Many of the new cases involved people who had recently returned from abroad.

Patients confirmed infected in Gunma and Gifu prefectures had traveled to the Philippines.

In Kanagawa Prefecture, a person tested positive after returning from New York state.

Pound down after coronavirus-stricken Johnson taken to hospital for tests