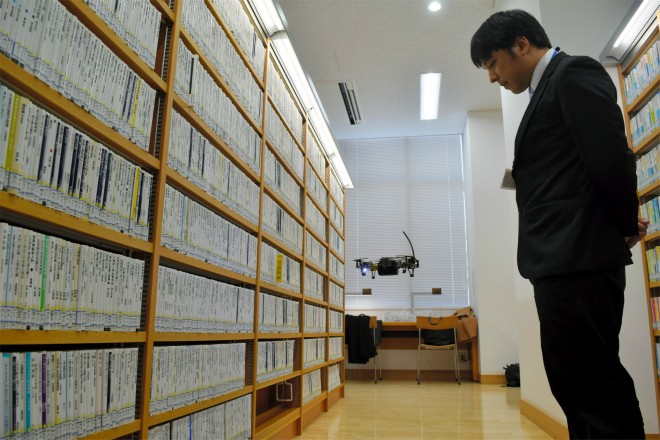 A librarian monitors a flying drone to scan bookshelves at a library in the Nishifuna 1-chome district of Funabashi, Chiba Prefecture, on March 12. (Shigeo Hirai)

FUNABASHI, Chiba Prefecture--A drone will soon be flying through the shelves of a city library here, but it won't be disturbing the concentration of patrons or interfering with the daily operation.

Instead, the drone and artificial intelligence (AI) will be adapted to eliminate the troublesome, time-consuming task of regularly examining books at libraries imposed on human staff.

A verification test of the new automation tool to improve efficiency and reduce burden on librarians has started with an eye on “halving the time currently required for checking” at Funabashi city’s west library in the Nishifuna 1-chome district.

“The initial phase of the current manual inspection takes three days, and I want the time to be halved with the adoption of the automatic system,” said a library representative. “If that proves true, library services will improve, such as a shorter closure period.”

Each of the 267,000 publications kept at the library are marked with the municipality’s dedicated nine-digit identification numbers, barcodes and electronic IC tags, so they can be registered and managed in an integrated fashion.

To manually read all the barcodes and IC tags to be matched with registered data, 30 or so library staff members currently examine all the books for five consecutive days annually with the facility closed during the period.

The process is aimed at returning the publications to their correct locations after being placed on the wrong bookshelves once their category, author and other elements are identified.

About 50,000 works are found missing or improperly placed on shelves in the first phase of checking every year.

Many human errors, such as forgetting to scan specific books, are also often reported during the manual program, leading to a huge amount of time for re-scanning and other corrective measures, according to library representatives.

To lessen the burden on the staff involved in the procedure, Funabashi city will jointly develop a system with Kyocera Communication Systems Co. in Kyoto to automatically link the titles and writers’ names on the spines of books with registered textual information.

Under the system, photographing bookshelves with tablet computers will allow the spine images to be analyzed for titles and writer names based on AI, so that publications put in wrong locations can be quickly spotted.

As the locations of books will be shown on the mobile devices’ screens, it should become easier for librarians to find certain works, according to city officials.

While up to 50 paperback-sized books are accommodated in a shelf, about half of them, or 25 publications, can be scanned in one round under the new method.

The precision levels of image recognition and AI analysis will be refined, and the number of books read by a single scan is expected to improve as well.

Another characteristic of the technology is that the photographing process can be finished without the help of staff.

Introducing one of the world’s smallest commercial drones created by Liberaware Co. in Chiba, the book inspection system will photograph and match data in the snapped images with registered information autonomously.

Funabashi city is considering introducing the new system at all its four libraries and 13 reading rooms within community halls to more efficiently manage a total of 1.6 million books, after it is completed by the end of fiscal 2020.