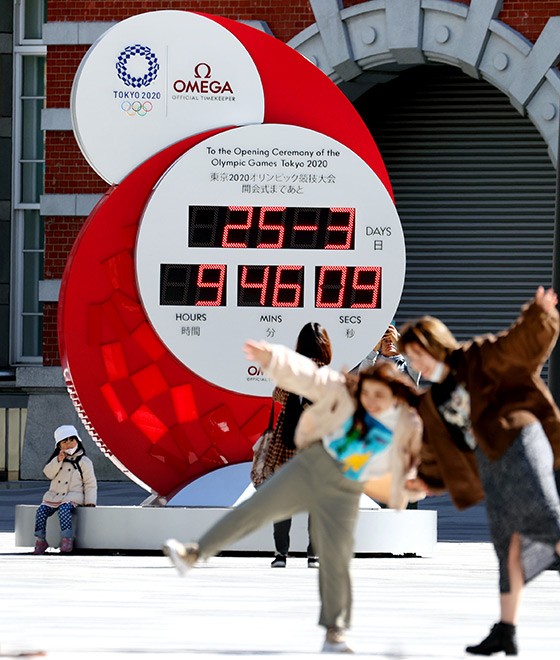 A countdown clock shows the time and day in Tokyo’s Chiyoda Ward on March 25, the day after the Tokyo Olympics were postponed. (Shiro Nishihata)

Table tennis player Kimie Bessho remained upbeat after being denied a chance this year to compete in her fifth straight Paralympics.

“My coach said I will get stronger if the Games are postponed,” she said.

Although disappointed, Bessho and other Japanese athletes, organizers, volunteers and others who had long prepared for the 2020 Tokyo Olympics and Paralympics tried to find something positive about the postponement of the Games.

The International Olympic Committee and Prime Minister Shinzo Abe on March 24 agreed that the Games would not be held this year to protect the athletes and spectators from the novel coronavirus pandemic that continues to spread.

For Bessho, competing this summer could have proved hazardous. She is now 72 years old.

“I will be careful about infections because I am old and I want to fully prepare to play (next year),” Bessho said.

Yasuhiro Yamashita, president of the Japanese Olympic Committee, told reporters on March 25 that the decision to postpone the Games came earlier than he had expected.

“I think that athletes have mixed feelings. It was a difficult decision but prioritizing the safety of athletes comes first,” he said. “I want them to think positively, reset their feelings and prepare for 2021.”

Yamashita, who won an Olympic gold medal in judo, knows all to well what it’s like to miss an Olympic competition and become a “phantom representative.”

He was on the national team in 1980 when Japan joined other countries in boycotting the Moscow Olympics over the Soviet Union’s invasion of Afghanistan.

Asked if the athletes will have to redo competitions to qualify for the Games in 2021, Yamashita said: “The situation differs depending on the sports association.”

But he acknowledged that the selection process will have to be redone for some events.

“We will respect the decisions of each association,” Yamashita said. “I hope each athlete manages to switch their mood and do their best again for 2021.”

Akiyo Noguchi had secured a berth in the 2020 Olympics in the debut event of sport climbing, and she had planned to retire after representing her country in Tokyo.

“To be honest, I can’t easily control my feelings,” Noguchi, 30, said in a statement released by her management company after the postponement was announced. “But on a positive note, I’m happy that I can extend my beloved athletic life, even for just one day.”

Even in the Tohoku region, which is still recovering from the devastation of the 2011 Great East Japan Earthquake, tsunami and nuclear disaster, positive signals emerged from the disappointment of the Games’ delay.

Japan’s leg of the Olympic torch relay was scheduled to start on March 26 in Fukushima Prefecture.

Fukushima Governor Masao Uchibori said on the evening of March 24 that it was “regrettable,” particularly for the runners and local residents, that plans for the torch relay were changed at the last minute.

But he added: “This is the new start. We can light a flame of hope.”

The “Flame of Revival” was supposed to tour Fukushima, Iwate and Miyagi, the three prefectures most affected by the triple disaster in 2011.

For the time being, the Olympic flame will be on display in Iwaki in Fukushima Prefecture, the planned final exhibition site of the flame in the three prefectures.

As for future places to store the flame, Uchibori said: “An important candidate site is the J-Village sporting complex. This is one of the prefecture’s symbols of restoration.”

On March 25, about 10 volunteers who had planned to decorate the J-Village facility with flower ornaments took pictures of the No. 9 soccer field where a ceremony for the torch relay had been scheduled.

In the streets around the J-Village, cleanup work started to remove flags and banners.

Takahiko Igarashi, 45, who arrived from Sendai as a member of a sponsor company, was smiling.

“We will have to create the flags again, but I feel motivated as a person supporting the Games if we can hold the event in an environment where we can help each other without worrying about the virus,” she said.

However, rescheduling such a grandiose event as the Olympics will be a daunting challenge for the country.

The FINA World Championships in swimming in Fukuoka are scheduled for July 16 to Aug. 1 in 2021, which could coincide with the postponed Summer Olympics. The Fukuoka city government on March 24 emailed FINA to ask for its plan.

According to the city government, the association responded by email at 8 p.m. and said it was watching developments concerning the Olympics. Then, the announcement came that the Tokyo Games were postponed.

“I was surprised by the earlier-than-expected decision,” a city government official said. “We want to discuss it after the new schedule of the Olympics is set.”