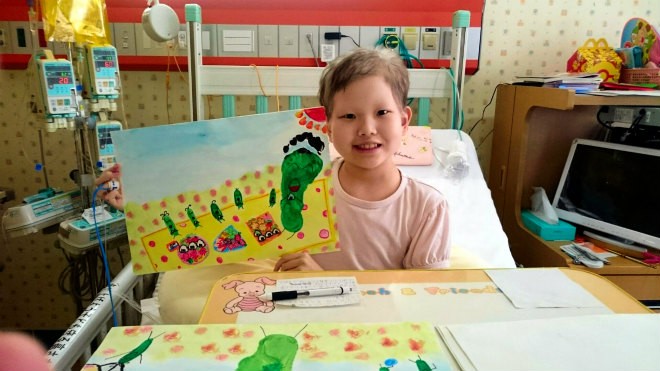 Shoka Morikami works on her drawings in a hospital bed in Okayama. (Provided by her family)

It was written and illustrated by Shoka Morikami, a young girl in Fukuyama, Hiroshima Prefecture, who died last year. She was only 12.

The story's protagonist, Soramame-san, was created in the image of Shoka's own footprint, which she made by smearing the sole of her foot with green paint and pressing it on drawing paper.

She was in the hospital at the time, undergoing treatment for a rhabdomyosarcoma, an aggressive and highly malignant form of cancer, which was discovered on her left leg when she was 5.

About six months before her death, Shoka started drawing pictures that depicted Soramame-san and her brothers having a picnic and playing together.

According to her father, Hironori, 45, Shoka was an active little girl who always begged to go to the local playpark for swing and slide rides.

"Even while in hospital, she would race through the corridors and flash big smiles at other patients," he recalled, adding that her attitude was the source of his own consolation and courage.

Shoka was in and out of the hospital for years. But on the day of her school's sports day when she was in the sixth grade, she practiced for and performed in group gymnastics.

She was also able to go on a two-night, three-day school trip to the Kansai region.

Her mother, Yoshie, 50, recalled, "When I brought her to school, her classmates came running to her to hold hands, all shouting, 'Sho-chan.'"

But before Shoka was to start junior high school in spring last year, her condition deteriorated in January.

Fighting excruciating pain and clutching the bedrail, she said, "I don't want to die yet."

She did not live to fulfill her fervent wish to attend her elementary school's graduation ceremony. But her classmates carried her portrait. And when her name was called, they answered in unison, "Here."

Shoka's picture book was published last year. Every page is alive with her footprint.

It is as if this book traces the footsteps of her 12-year life. I cannot read it without tears.