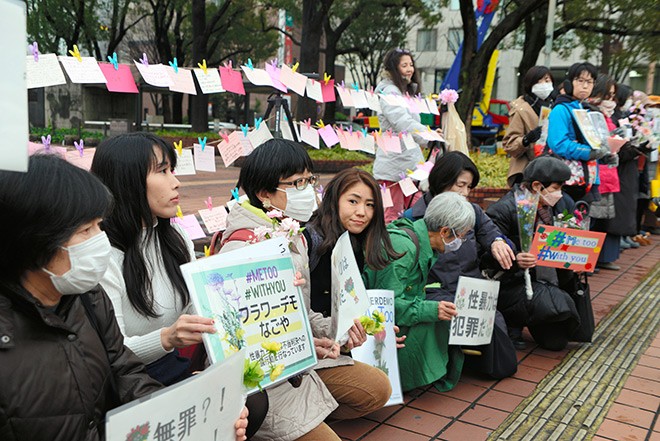 Messages of protesters are featured on cards along ropes at a Flower Demonstration against sexual violence held in Nagoya on March 8. (Sayaka Emukai)

NAGOYA--Pieces of paper fluttering in the wind like laundry are part of an artistic production designed to give a voice to victims of sexual abuse and harassment.

One of the notes reads, “A strange man groped my body when I was returning home from school.” Another says, “I could not talk back when I was told that I should have a baby.”

The work, titled “The Clothesline,” is the brainchild of Mexican artist Monica Mayer, 66.

On display at the Aichi Triennale 2019 international art festival in Nagoya, the work emerged at Hisaya Odori Park here in early March.

Clothes pegs fix the pinkish cards to long hemp ropes pulled taut. The messages originated from marchers at the Flower Demonstrations held to protest sexual violence and demand justice for the victims.

The demonstrations started around Japan after the Nagoya District Court’s Okazaki branch in March last year acquitted a father of sexually abusing his daughter.

“It is very important to organize and fight to change the laws that are unfair to women,” Mayer was quoted as saying by Ayumi Oka, who volunteered to help the artist produce the work for Aichi Triennale. “I hope the Clothesline is a useful tool to visualize the problems of violence against women in Japan, as it has been in Mexico.”

In Mayer’s expanding artwork, visitors can detail their experiences of being victimized and offer suggestions on how to prevent sexual harassment on the cards, which will be attached to the rope.

Anyone can copy Mayer’s project to share the message.

A group of volunteers involved in the artwork at Aichi Triennale has aggressively spread the campaign.

“I wanted to introduce a place for dialogue in towns,” said Oka, 29, who is a member of the group.

After Mayer approved the volunteers’ plan to “display the artistic production around town,” the work was shown outdoors for the first time in July at the Flower Demonstration in Nagoya.

For many victims of sexual abuse, it is difficult to verbally explain their suffering. The cards help them to more easily share their experiences, sorrow and anger in a visible manner, Oka said.

”I was surprised that so many voices have been ignored,” she said.

“The Clothesline” project has been organized monthly to coincide with the Flower Demonstration in Nagoya since December. In addition, exhibitions themed on sexual violence at campuses and against foreign residents in Japan have been held at Sophia University in Tokyo and the Mexican Embassy in Japan.

The volunteers plan to widen the campaign throughout Japan during the year, particularly on International Day for the Elimination of Violence against Women on Nov. 25 and Human Rights Day on Dec. 10.

They repeated their final goal: realizing a world where no one is victimized by sexual crimes and eliminating the need for victims to raise their voices.