With Tokyo in a ‘critical phase,’ Koike asks public to show restraint 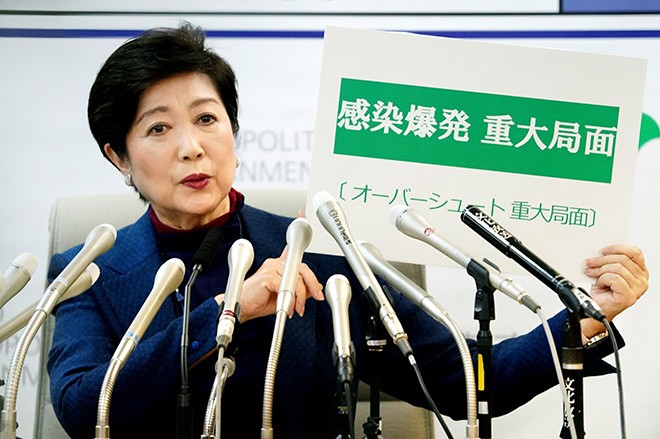 Tokyo Governor Yuriko Koike holds up a sign that says a "critical phase" had been reached in a possible "infection explosion" in the nation's capital. (Takuya Tanabe)

The number of confirmed new coronavirus infections in Tokyo spiked to a daily record on March 25, but Tokyo Governor Yuriko Koike was particularly worried about 10 of them.

The route of infection for the 10 or so patients was unknown, raising fears that cluster infections and community spread of the virus may lead to what Koike warned could be an “infection explosion” in Tokyo.

At an emergency news conference on the evening of March 25, the governor said the capital has entered a “critical phase” in preventing such an explosion and pleaded for Tokyo residents to work from home as much as possible and refrain from going out at night and over the weekend.

Although she did not resort to her earlier warning of locking down the capital, she voiced irritation about public complacency in the face of the pandemic, including the holding of a K-1 martial arts event attended by more than 6,000 people in Saitama Prefecture.

The 41 coronavirus infections reported in Tokyo on March 25 continued the trend of record new cases, with 16 cases confirmed on March 23 and 17 the following day. Tokyo now has 212 confirmed infection cases, the most of any prefecture.

Koike said her greatest concern at the moment was not knowing how at least 10 of the new patients on March 25 became infected.

Another worry was that 11 newly confirmed infections were among patients and others who had visited Eiju General Hospital in Taito Ward.

Five people at the hospital had already tested positive for the novel coronavirus by March 24. One patient in his 70s died from COVID-19, the disease caused by the virus, that day.

Four of those five people were patients and a worker on the same floor of Eiju General Hospital. Tokyo metropolitan government officials said there was a possibility that the virus has spread within the hospital.

Coronavirus tests were being conducted on patients and hospital staff. The hospital now has about 300 patients.

Eiju General describes itself as a regional flagship hospital for the Taito Ward area, but it also accepts outpatients from outside the ward. Around 200,000 people are registered with the hospital.

On March 25, the hospital decided to cancel outpatient care for the time being. But a prolonged period of suspended outpatient care could affect the medical care system for the ward and surrounding area.

This would not be the first time the novel coronavirus has spread within a medical institution. Twenty-four infections were confirmed in individuals who worked at or were hospitalized at the Oita Medical Center on the southern main island of Kyushu.

Koike said the top priority is to prevent the virus from infecting those most vulnerable, such as elderly people, which could lead to a sharp increase in serious cases of respiratory problems and further strain the medical system.

Her request for the public to exercise restraint came ahead of a weekend when parties are usually held to view cherry blossoms in full bloom.

April also marks the start of a new fiscal and school year. In normal years in April, large numbers of workers and students from other parts of Japan congregate in Tokyo to begin their careers or study at new institutions.

Those newcomers to the capital could unknowingly be carrying the coronavirus and infect others around them.

Koike’s words were addressed to Tokyo residents, but about 2.8 million people commute into the capital on a daily basis for work and school.