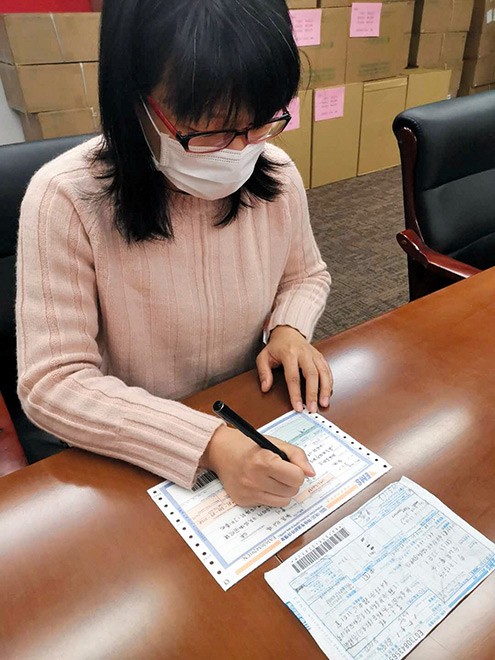 TOYOKAWA, Aichi Prefecture--When the new coronavirus was sweeping through China in early February, the Toyokawa city government sent 4,500 face masks to China's Xinwu district to help fight the outbreak there.

Now, Xinwu district government officials have reciprocated 10-fold, sending 50,000 face masks to its "sister city," which is facing a dire shortage of its own.

Toyokawa Mayor Yukio Takemoto, who asked Xinwu, part of the city of Wuxi in Jiangsu province, eastern China, for assistance, was grateful for the generous response.

"We really appreciate the courtesy from the Xinwu district," he said. "Once we receive them, we will hand them out to care facilities for the elderly and medical institutions in our city.”

On Feb. 4, Toyokawa city sent 4,500 face masks to Xinwu, as five people had been infected with the new coronavirus in the district.

The Toyokawa city government officials posted a message meaning “Fight on!” on the boxes containing the face masks.

Subsequently, the new coronavirus began to spread in Japan, with some cases of infected residents reported in Toyokawa city. Toyokawa officials provided face masks it had in storage to its employees.

But as it became difficult to obtain a new supply, Toyokawa officials asked Xinwu on March 24 if it could provide any face masks.

"If your district has enough face masks, we would like to ask that you spare some for us," they said.

A Xinwu district official responded, saying, “We want to return the favor that was offered to us when our district was having a difficult time.”

On March 25, Xinwu officials contacted the city, saying, “We are worried about the situation in Toyokawa city. New infections have not been found in the Xinwu district, and the situation in the district has settled down for now.”

Toyokawa officials were told that Xinwu had completed sending 50,000 face masks as of that day.