OLYMPICS/ Abe, Koike in cahoots on need for delay before torch relay 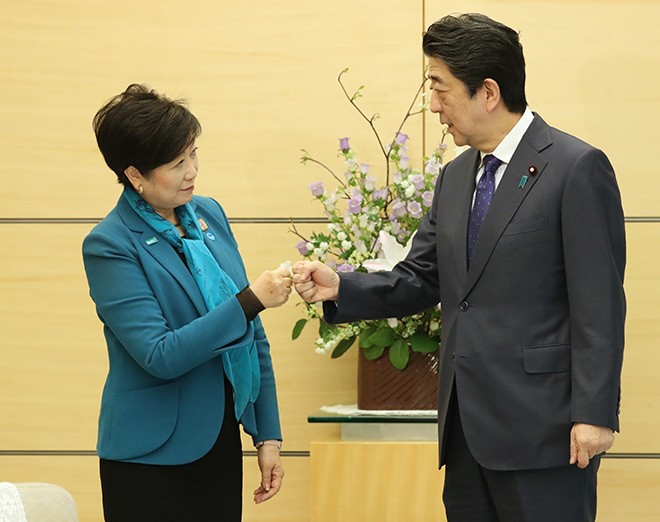 As quick as a 100-meter sprinter, the postponement of the Tokyo Olympics until 2021 came out of the blocks only two days after the International Olympic Committee said a decision would be made in four weeks.

However, those involved in the negotiations about the postponement said that Prime Minister Shinzo Abe and Tokyo Governor Yuriko Koike were in informal talks from early March.

“Both the prime minister and governor from an early stage were in agreement that a decision to postpone should be made before March 26,” said a source close to Koike.

That was the planned date for the start of the Olympic torch relay in Fukushima Prefecture.

On the evening of March 24, Abe announced that an agreement had been reached with the IOC to postpone the Tokyo Olympics until the summer of 2021 at the latest.

The World Health Organization recognized the new coronavirus as a pandemic on March 11, potentially threatening the safety of the athletes, spectators and all those involved with the Summer Games.

The following day, Koike visited Abe at the prime minister’s office for what ostensibly was to be an exchange of views on how to deal with the coronavirus outbreak.

But sources said the meeting was an extension of the informal discussions between the two that had started from early March and which concerned the holding of the Tokyo Olympics.

At the March 12 meeting, Abe and Koike came up with asking for a postponement before the start of the Olympic torch relay to stave off total cancellation of the major sporting event.

That would have been a major embarrassment for Koike, who is facing re-election this summer. It would also have hurt Abe, who wanted to make the Olympics one of his political legacies. His term as head of the ruling Liberal Democratic Party and, by extension, prime minister, ends in autumn 2021.

One source close to Koike said a major reason the two were in conformity about a postponement was “both had their eyes on an economic stimulus package.”

Abe and Koike were in agreement about stimulating the economy by postponing the Olympics for one year, the source added.

Meanwhile, IOC President Thomas Bach was obviously delighted that Abe requested postponing the event, as he responded immediately that he agreed 100 percent with Abe’s request.

If Bach had brought up postponement, some of the ensuing additional expenses might have been forced on the IOC.

One estimate is that several hundreds of billions of yen would be needed to cover expenses such as maintaining the Olympic venues for an additional year and paying for canceled hotel reservations this summer.

But with Abe and Koike requesting the postponement, Bach was only too happy to oblige.

Now if the Tokyo Olympic organizing committee is unable to cover all the additional expenses stemming from the postponement, the Tokyo metropolitan government would cover the deficit.

If the Tokyo government is unable to shoulder the entire burden, the central government would be called upon to pay any remaining expense since it was Abe’s idea to postpone the Olympics.