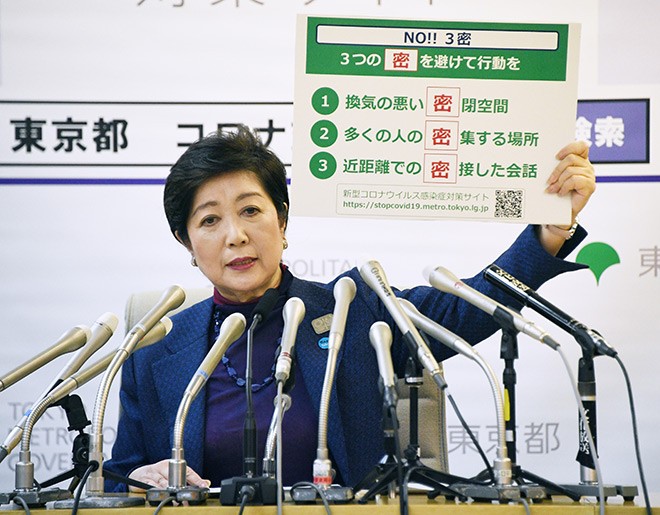 Four prefectures in the greater Tokyo metropolitan area are urging residents to avoid all unnecessary travel to the capital to stave off a possible explosion in coronavirus infections in the densely populated area.

Tokyo Governor Yuriko Koike also plans to hold a videoconference with the governors of Chiba, Kanagawa, Saitama and Yamanashi on March 26 to seek their cooperation in reducing the inflow of traffic to Tokyo, sources said.

Koike on March 25 asked all Tokyo residents to work from home and refrain from going out at night and on the coming weekend, saying the capital has entered a “critical phase” in the fight against the novel coronavirus.

Kanagawa Governor Yuji Kuroiwa on March 26 urged residents in his prefecture, southwest of Tokyo, to refrain from all nonessential travel this weekend.

“I ask residents to cooperate with the Tokyo metropolitan government,” Kuroiwa said at the start of his news conference. “Now is an important period in preventing infections from explosively spreading.”

He also asked residents to avoid three environments: closed rooms, crowded places and areas where people come in close contact. And he asked organizers to refrain from holding public events.

Kensaku Morita, governor of Chiba Prefecture, east of the capital, on March 26 also asked residents to cancel any plans to travel to Tokyo this weekend.

The Yamanashi prefectural government to the west of Tokyo also decided on March 26 to call on residents to avoid traveling to and from Tokyo this weekend.

Tochigi and Gunma prefectures also called on residents to avoid all nonessential travel to Tokyo this weekend.

On March 25, the number of new infections cases in Tokyo hit a daily high of 41.