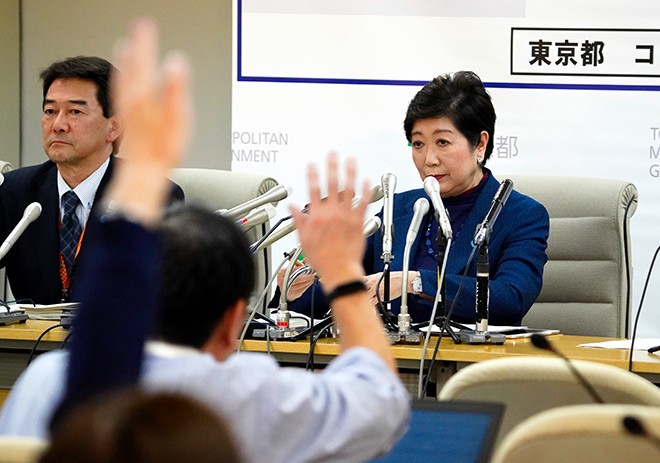 The spike in COVID-19 patients in Japan is likely being fueled by a surge in arrivals of Japanese and foreign travelers from abroad, particularly those who ignore requests to self-quarantine, health experts said.

As of March 23, 134 people who arrived in Japan from overseas tested positive for the novel coronavirus.

In Tokyo, about 80 new coronavirus cases were confirmed over the eight-day period to March 24, and about a quarter of them had recently been abroad.

The number of entrants to Japan from the United States and European countries has been rising as travelers try to get ahead of tighter entry restrictions due to the COVID-19 pandemic.

One problem, the experts say, is that arrivals can simply refuse government requests for them to self-quarantine for 14 days.

Such defiant travelers could unknowingly be carrying the virus and spreading it around Japan.

“If this goes on, the infected people coming from abroad could end up worsening the domestic outbreak,” said Hitoshi Oshitani, professor of virology at Tohoku University and a member of the government’s panel of experts. “It is important to keep tabs on the entrants’ health conditions and make sure they are taking measures to prevent transmitting the disease to others.”

According to the health ministry and other sources, fewer than 10 arrivals a week tested positive for the virus until March 8.

Of the 134 arrivals who tested positive, 11 had been in China, where the virus is believed to have originated.

Recently and increasingly, returnees and travelers from other parts of the world have joined the list.

Twenty-four of the 134 patients have stayed in Egypt, while 22 were in France, 12 in Spain, nine in Britain and eight each in the United States and the Philippines.

Some have stayed in countries in Africa, where COVID-19 cases have not spread as much as on other continents.

So far, 64 people in Japan are believed to have been infected by the arrivals.

The government on Feb. 1 started refusing entry of people who had stayed in China’s Hubei province.

Entry restrictions were then expanded to cover travelers from all of China, South Korea, Iran, Egypt and European countries.

With the exception of travelers from some hot spots in China and South Korea, those who land in Japan are asked to self-quarantine in their homes or hotels for two weeks and avoid public transportation.

The government, however, cannot force the arrivals to comply with the request.

A female student traveled to Spain and returned to Japan on March 20. She was tested for the virus at Narita International Airport’s quarantine station and asked to wait until the result came back.

But she instead went to her home in Okinawa Prefecture by taking a flight from Haneda International Airport.

The request to self-quarantine for two weeks will be made to all entrants from the United States, regardless of nationality, who arrive on planes and vessels that have departed on and after March 26.

The government is also expected to soon deny entry to foreign nationals arriving from European countries.

Many people were expected to land in Japan around March 25 to avoid the coming ban.

Atsuo Hamada, a professor at Tokyo Medical University who specializes in travel medicine, said the influx of returnees could cause an “overshoot,” or an explosive surge in the number of COVID-19 patients.

Hamada believes that Japanese nationals who live overseas or traveled abroad during the spring break vacation are returning to Japan without knowing that they are infected.

He said the spread from their infections could exacerbate what is already a dire situation in the largest population center in the country.

“Especially in Tokyo, where many people have had contact with foreign countries, it is already considered a COVID-19 epidemic,” he said.

Tokyo Governor Yuriko Koike on March 25 urged residents to work from home and refrain from going out at night and during the weekend.

“It is commendable that the governor has gone further and urged residents to avoid not only large-scale gatherings but also nonessential outings at night,” he said. “In fact, cases of becoming infected at nighttime gatherings are on the rise.”

Yoshihiro Kawaoka, a virology professor at the University of Tokyo’s Institute of Medical Science who is also a member of the government’s panel, said the cases being reported now are the people who were infected about a week ago.

Over the three-day weekend last week, many people were seen outdoors in crowds while more people were returning to and arriving in Japan from the United States and other countries.

“I expect the number of patients will further increase within the next one to two weeks. Japan is in an extremely dangerous situation right now,” Kawaoka said.

Koji Wada, a professor at the International University of Health and Welfare and an expert in public health, said eliminating occasions when people can gather would stem the spread of the virus.

“That has been proved in Hokkaido and China,” Wada said. “It is likely that (officials) will urge people not to enter areas where the spread is likely, and then ease the restrictions when the risk ebbs down.”