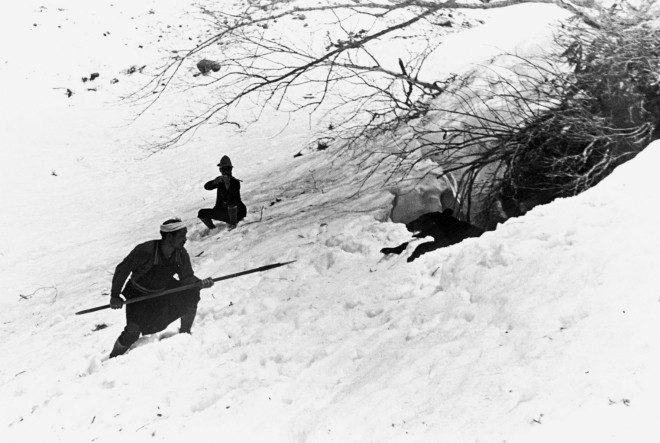 Eisaku Saeki, foreground, holds a spear and Fusashige Saeki aims a gun at a target in a photo taken by Asahi Shimbun photographer Giichi Hasegawa in April 1936, which accompanied an article in the Osaka edition of The Asahi Shimbun. (Asahi Shimbun file photo)

TATEYAMA, Toyama Prefecture--Newly discovered black-and-white photographs taken more than 80 years ago bring to life a springtime ritual here, when bear hunters in the Ashikuraji district would venture deep into the snow-covered mountains.

The photographs depicting how the huntsmen pursued the animals when spring arrived were found among the personal possessions of a resident.

Stamped “The Osaka Asahi,” the eight images were kept by Shigeyuki Saeki, 82, manager of the Kwansei Gakuin University’s Tateyama mountain hut, which stands on the Mimatsuzaka slope along the Tateyama Kurobe Alpine Route.

The pictures accompanied an article in The Asahi Shimbun’s Osaka edition of May 3, 1936, introducing “Tateyama’s way to hunt bears."  The recently discovered photographs appear to be copies of the images presented to the local huntsmen by the photographer.

The caption for one of the images describes a hunter with a headband as “Eisaku Saeki trying to strike with a spear,” while another describes “Fusashige Saeki aiming his gun at a target.”

Fusashige is Shigeyuki's father, a soldier who died in October 1937 during the Second Sino-Japanese War.

The photo is a rare reminder of his father for Shigeyuki because he has no memories of him following his birth in April 1937.

Kazuyuki Saeki, 67, a child of a nephew of Eisaku, who once served as manager of the Tsurugigozengoya hut on a ridge of the Tateyama mountain range, said his late father, Munehiro, would tell him heroic exploits of Eisaku.

According to Kazuyuki, Eisaku was famed for being an exceptional mountain guide in Tateyama along with Kazuyuki’s grandfather, Sosaku, and involved in bear hunting as well.

A spear carried by Sosaku around his waist while in pursuit of bears, is among Kazuyuki's possessions.

As guns were the primary weapon for hunting, Kazuyuki surmised that the spear was used “for finishing off or ritual purposes.”

According to the accounts of Kazuyuki, huntsmen in Tateyama would not enter the mountains during the dangerous coldest time of winter. Instead, the bear hunt would commence following a March festival to honor the mountain deity.

As the campaign depicted in the pictures were seemingly conducted out of season, Toshiaki Shiraishi, a curator at the Tateyama Caldera Sabo Museum, noted that they brought down their prey “under the objective of removing nuisance animals and birds.”

“The operation took place in the period where the gallbladders of bears, which brought a good price then, grew especially large. It also had the objective of making the animals aware of how dangerous humans are to them,” said Shiraishi.

Efforts by the prewar huntsmen are said to have helped control the number of large mammals in the wild, given that bears and other such animals today are thriving in the greatest numbers since record-keeping began in the Meiji Era (1868-1912).

“That is because of the reduced number of hunters,” Shiraishi said. “It was impossible in those days to encounter a bear unless one went deep in the mountains due to the strong presence of hunters.”