Japan set to ban entry from the U.S. as early as next week 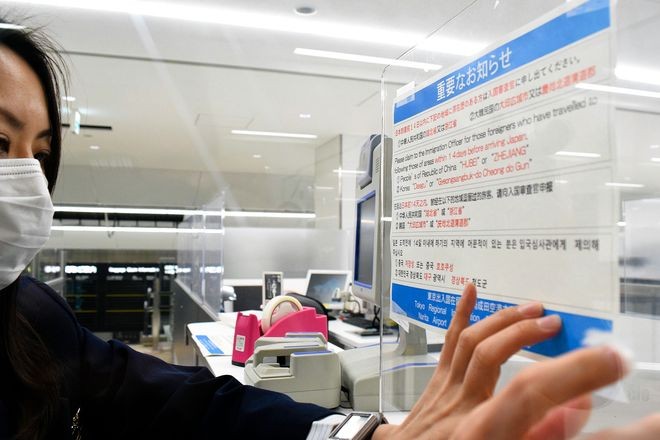 A Narita Airport employee posts a new announcement about an entry ban that widened its scope of coverage. (Yoshifumi Fukuda)

Japan is moving to refuse entry to all foreign nationals travelling on U.S. passports or who have been in the United States for the past two weeks.

The restriction is expected to be decided on as early as next week after coronavirus infections skyrocketed in the United States, making it the country with the highest number of cases.

Discussions are still being held to decide whether the measure would cover all of the United States or just certain parts, government sources said.

All foreign nationals who have been in the United States for the past two weeks would be denied entry unless they had pressing circumstances.

The measure would be implemented under provisions of the Immigration Control and Refugee Recognition Law.

The Foreign Ministry is expected to raise its infectious disease warning for the United States to Level 3, second from the top on a four-stage scale, and issue a recommendation to Japanese nationals to cancel plans to travel to the United States.

The government had already started moving from March 26 to restrict entry for those entering from anywhere in the United States.

The restriction applies even to Japanese nationals returning from the United States.

All new arrivals are required to self-quarantine themselves for two weeks at their homes or hotels and other accommodation under provisions laid down by the head of the local quarantine office.

Arriving passengers from the United States are also being told to avoid using public transportation in Japan.

Coronavirus infection cases have been multiplying rapidly in states such as New York and California. By March 27, the total number of confirmed cases had exceeded 100,000.

China says U.S. ‘addicted to quitting’ over plan to withdraw from WHO

China warns U.S. it will retaliate on moves over Hong Kong