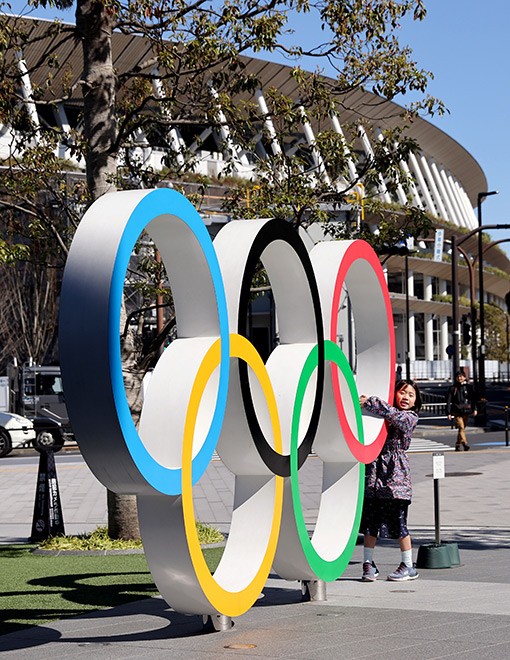 A girl poses with a monument of the five Olympic rings in Tokyo's Shinjuku Ward on March 25. (Hikaru Uchida)

Organizers of the Tokyo Olympics are aiming to open the postponed Games on July 23, 2021, almost exactly a year after they were originally scheduled, rather than next spring, sources said.

The organizers had accepted the delay due to the new coronavirus pandemic.

Yoshiro Mori, president of the Tokyo 2020 organizing committee, said committee members are “hoping to make a decision during the next week” concerning the new schedule when he appeared on a TV news program on March 28.

Japanese officials are now leaning toward the new opening date of July 23, 2021, also a Friday, according to the sources.

The committee members and other officials have been discussing the new schedule with the International Olympic Committee. They are expected to announce the result in the coming weeks.

The IOC and the Japanese organizing committee announced on March 24 that the Tokyo Olympics will be delayed a year due to the global outbreak of the new coronavirus.

Thomas Bach, president of the IOC, floated the idea the following day that the rescheduled Games could be held in the spring, saying it would not necessarily be restricted to summer months.

But many Japanese officials favor a one-year postponement rather than holding the sports extravaganza in the spring, saying that would allow adequate preparation time for the rescheduled Summer Olympics.