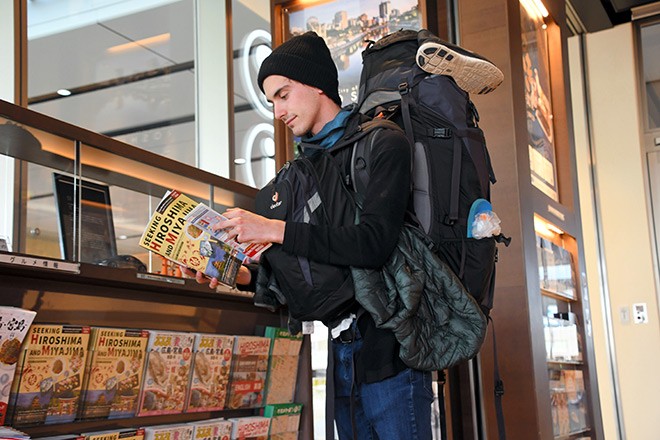 A foreign tourist picks up a copy of Seeking Hiroshima and Miyajima at an information center at Hiroshima Station. (Akina Nishi)

HIROSHIMA--At a time when tourists are increasingly relying on their smartphones to get around, a free English-language newspaper is winning praise for going the extra distance for foreign visitors here.

The publication, called Seeking Hiroshima and Miyajima, not only offers tips on local food, sightseeing spots and transportation, but it also presents the information from a foreign tourist’s perspective.

The publisher’s thorough research on the city and the island won the top prize last year at an awards event organized by the Nippon Community Contents Association to recognize excellence in town magazines and free tabloids.

The association founded the annual contest in 2011 to support local publications that contribute to the bustling of communities. Last year, 402 magazines and newspapers entered the competition, which was judged by a Japan Tourism Agency official, a literature professor and other experts.

Seeking Hiroshima and Miyajima was founded in 2017 by Rashin Corp., headed by Fumihiro Ishioka, 39, in the city’s Naka Ward. Sixty-thousand copies are published twice a year.

The paper carries an easy-to-understand transportation guide with routes shown in different colors. It also provides a checklist illustrated with a cow, pig and other elements so that visitors can show restaurant staff items that they cannot eat because of religious or other reasons.

The jurors praised the efforts, saying well-thought-out features can be found throughout the pages to help readers enjoy their trips.

“I wanted to make something that would cover all necessary information in one publication,” Ishioka said.

Ishioka left an advertising agency in 2012 and aspired to start a free newspaper, running paid advertisements from restaurants to generate revenue.

Although he initially couldn’t find any advertisers, a famous “okonomiyaki” Japanese pancake restaurant strongly supported his idea and decided to place an ad.

Ishioka scrambled to find other advertisers and founded an eight-page tabloid called “Umai! Hiroshima” (Yummy! Hiroshima) in June that year.

He visited hotels and other establishments where the tabloid was distributed to ask staff members what kind of information tourists were looking for.

The number of advertisers grew as the publication underwent multiple revamps. Currently spanning 50 to 60 pages, it is published four times a year for a total of 360,000 copies.

Ishioka decided to start an English version about three years ago after learning about the heavy demand from the increase in tourists from abroad. The president teamed up with an English-speaking guide and other experts to create a foreigner-friendly tabloid.

The team first studied transportation route maps and free newspapers in the United States to make the local map and other content appear natural to foreign tourists. The team also made sure to show routes connecting popular sightseeing spots, timetables and other detailed information.

Although tourists widely use smartphones in the city and island, Seeking Hiroshima and Miyajima has been well-received by non-Japanese visitors for its convenience because they don’t have to search the internet for each query, Ishioka said.

“I’m most happy when I can be of help,” he said. “I want to continue helping tourists to make their trips fun and memorable.”