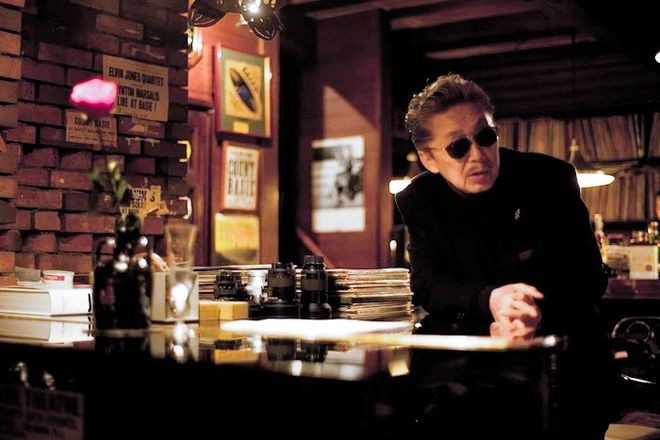 ICHINOSEKI, Iwate Prefecture--A documentary film about a revered Ichinoseki jazz cafe will premiere in late May, featuring footage of performances by jazz greats and interviews with big names.

"Jazz Kissa Basie: Swifty no Ballad" (Jazz cafe Basie: Swifty's ballad) looks back on five decades of the jazz spot managed by Shoji Sugawara, 77, who goes by the name of Swifty.

It was directed by Tetsuya Hoshino, 54, who made his directorial debut with the 104-minute film. He lives in Tokyo and has been frequenting Basie, named after the famous jazz pianist and band leader Count Basie, for many years.

"It is a miracle for a cafe to last 50 years. Basie must have something that attracts people," Hoshino said.

The documentary contains footage of live performances at the cafe by the late great jazz drummer Elvin Jones and leading Japanese artists, including saxophonists Sadao Watanabe and Akira Sakata. It also includes interviews with conductor Seiji Ozawa and actress Kyoka Suzuki, who filmed scenes at Basie for her first film.

Also sprinkled with footage of student protests in or around 1970 and Tokyo's downtown areas at night, the movie vividly conveys the social ambience of the time when Basie opened.

In one interview in the film, Hozumi Nakadaira, who runs the jazz cafe Dug in Tokyo's Shinjuku district, talks about how jazz cafes were packed with young people and buzzing with enthusiasm at the time.

Another charm of the film is that it captures the fantastic sounds produced by gigantic JBL loudspeakers set up at the cafe.

The film's sound crew, who once worked on a film by famed director Akira Kurosawa, used the Nagra, a high-end analog open-reel recorder, to record original phonograph records there of the Count Basie Orchestra, Miles Davis and other musicians often played at the cafe, capturing the bar's signature sound.

"I want the audience to listen and feel with their hearts," Hoshino said.

Sugawara said that jazz cafes--known for cultivating atmospheres devoted to record appreciation--are a form of culture unique to Japan, and noted they have garnered some attention abroad as well.

“I hope the film will serve as a starting point for the Japanese jazz cafe culture to be widely known," he said.

The producers said they intend to promote the film at international film festivals.

"Jazz Kissa Basie" will premiere in Tokyo on May 29 before going nationwide.

For more information, visit the official website at (https://www.uplink.co.jp/Basie/.