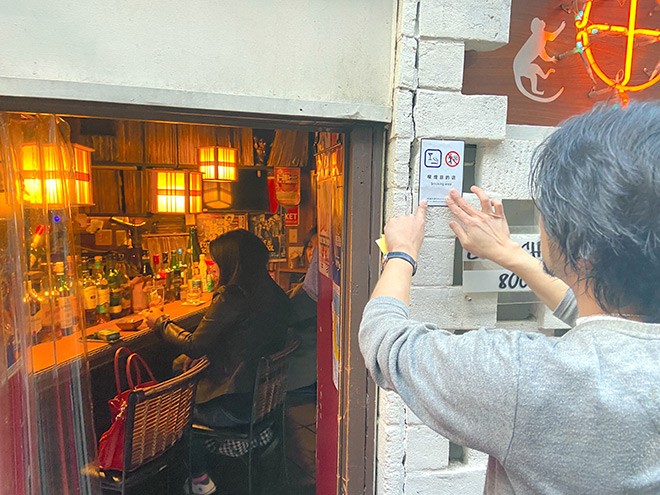 A sign that shows the facility is designated for smoking is put on the entrance of this restaurant in Kabukicho's Golden-gai in Tokyo’s Shinjuku Ward on March 17 before a new ordinance that prevents secondhand smoking takes effect in the capital in April. (Sokichi Kuroda)

In Tokyo's Kabukicho entertainment district, more than 100 small establishments are choosing to switch than fight, converting to "facilities for smoking" before a new anti-smoking ordinance takes effect on April 1.

Health ministry officials are accusing many such eateries and bars of blowing smoke in trying to exploit a loophole and allow customers to keep puffing away.

“The move exploits a legal loophole and is unconscionable,” said an official of the Ministry of Health, Labor and Welfare.

Under the ordinance, the Tokyo metropolitan government will ban smoking, in principle, at most restaurants in Tokyo from April 1. But that has prompted many eateries to switch to facilities designated for smoking, which are exempt like cigar bars.

In Kabukicho in Shinjuku Ward, about 300 small bars and snack bars stand in close proximity at the Golden-gai drinking and dining quarter.

Signs designating the facilities for smoking purposes had been put on the entrance of many restaurants there as of mid-March. Sources said more than 100 establishments are preparing to switch over.

The new ordinance that comes into full force in April in Tokyo prohibits smoking at restaurants that have employees except in dedicated smoking rooms.

The ordinance is stricter than the central government’s revised Health Promotion Law, which also takes effect on April 1. The new law permits smoking at establishments that are up to 100 square meters in size in the area where customers congregate.

Under the Tokyo metropolitan government’s ordinance, smoking will be banned, in principle, at some 130,000, or 84 percent, of the restaurants in the capital.

However, establishments that meet three conditions will be regarded as facilities for smoking, including cigar bars where customers can smoke cigars inside the shop.

Many bars and snack bars signed sales contracts with cigarette shops to switch to facilities for smoking and qualify for the exemption.

“Some restaurants gave up allowing smoking as they are providing staple foods,” said an official of the Shinjuku Sanko business promotion association, whose members are shops in the Golden-gai. “But many are likely to switch to operating as such a facility.”

According to the Finance Ministry’s Kanto Local Finance Bureau, about 240 places were permitted to sell cigarettes on a consignment basis in Tokyo in fiscal 2018. The number for fiscal 2019 ending in March reached some 1,200 by mid-March.

“It’s an unusual situation that we’ve never seen before,” said a bureau official. “We’re still receiving many applications (for selling cigarettes) and expecting more such applications ahead of the enforcement of the ordinance.”

Regarding the move, the health ministry official said, “It’s not desirable that restaurants switch to a facility for smoking just to sidestep the regulations.”

Hiroshi Yamato, a professor at the University of Occupational and Environmental Health and an expert on measures against passive smoking, said, “The move may force employees who are in a weakened state to be exposed to secondhand smoke.

“As the population of non-smokers increases, the restaurants (that will switch to facilities for smoking) will likely lose customers in the future,” he added.