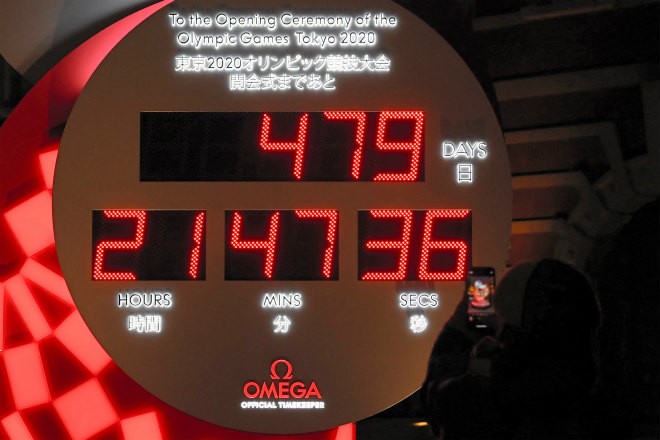 A countdown clock is adjusted to the rescheduled start of the 2020 Tokyo Olympics on March 30 in Tokyo’s Chiyoda Ward. (Reina Kitamura)

With new dates set for the postponed 2020 Tokyo Games, the organizers have more good news for anxious ticket holders.

Tickets already sold for the 2020 Games will still be valid for the rescheduled events as a general rule, the Tokyo Organizing Committee of Olympic and Paralympic Games decided March 30.

For those who bought tickets for 2020 events and won’t be able to attend the rescheduled ones, refunds will be provided.

The Olympic and Paralympic games were recently pushed back by a year, now set to run from July 23 to Aug. 8 in 2021, because of the global coronavirus pandemic.

Volunteers for the 2020 Games will be asked to help at their already-assigned locations next year, organizers said.

Torch relay runners will be given a priority to run in the rescheduled event as well.

Organizers have now also decided on items allowed into Olympic and Paralympic venues.

For the first time in Olympics history, PET bottles--one per person, up to 750 ml--will be allowed inside venues as countermeasures against the heat. Water bottles and non-perishable foods for individuals will also be allowed.

On the other hand, organizers are banning flags displaying political or ideological claims and messages considered immoral or against the public order.

Fans looking for the perfect selfie may also have to work a bit harder as at present they won't be allowed to use selfie sticks in the stands.

A committee representative urged spectators to "keep their baggage as small as possible (because) they will for sure bring home a lot of  inspiration and excitement."