Abe, Suga flatly deny a state of emergency is imminent 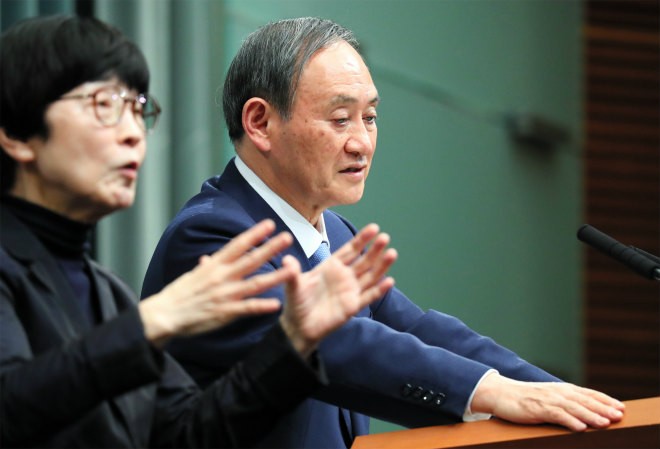 Prime Minister Shinzo Abe complained about "the spread of fake news" March 30 in quashing persistent online speculation that the government will declare a state of emergency on April 1 to deal with the coronavirus epidemic.

At his daily news conference the same day, Chief Cabinet Secretary Yoshihide Suga said: “There is no truth to such reports. I wish to clearly deny them.”

The issue was raised at a meeting of executives of the ruling Liberal Democratic Party following reports on the internet that a declaration was near.

Adding fuel to the speculation was something a high-ranking member of the Japan Medical Association said at a March 30 news conference.

Citing limitations on hospital beds to care for the rapid rise in the number of coronavirus patients, Satoshi Kamayachi, an executive board member who also sits on the government panel of experts dealing with the health scare, said it would be preferable if a declaration was issued now.

“It will be too late if a state of emergency is declared after an explosive spread of infections has occurred,” Kamayachi stated.

After the Diet on March 13 passed a revision to a special measures law to allow the government a freer hand to deal with the new coronavirus outbreak, Abe on March 26 set up a government headquarters, which approved basic guidelines two days later to handle the outbreak.

A recent surge in new infections in urban centers, such as the greater Tokyo metropolitan area and the densely populated Kansai region, led to speculation that a state of emergency declaration was imminent.

One internet post said the state of emergency would be declared on April 1 followed by a lockdown of urban areas the following day.

But on March 30, Suga repeated his past statements that the situation had not reached such a critical point.

The revised special measures law has a number of conditions that must be met before a state of emergency can be declared.

One is the possibility of widespread infections that pose a serious risk to the lives and health of the people at a national level.

Although government officials are generally of the opinion that this point has already been reached, with the likelihood of a dramatic impact on the economy, the view of a panel of experts would have to be considered before a declaration is issued.

But when the panel is consulted, the most pressing factors will be the fatality rate of the coronavirus, examples of symptoms worsening, leading to multiple organ failure or encephalopathy, as well as the number of available hospital beds to care for coronavirus patients.

The remark by the JMA executive heightened speculation about an imminent declaration, with one source in the prime minister’s office saying, “A declaration will likely be issued if more than 100 new infections a day continue in Tokyo.”

At the same time, government officials also made clear that a declaration would not lead immediately to the lockdown possibility that was raised just days ago by Tokyo Governor Yuriko Koike when she warned that the next two to three weeks would be critical.

While a number of countries have ordered their citizens to remain indoors for extended periods, Japan’s revised special measures law has no provision for a lockdown.

Yasutoshi Nishimura, the state minister tasked with implementing that law, said on a TV program March 29 that Japan did not have the same legal leeway as other countries in implementing coercive measures to bring the epidemic under control.

A high-ranking official of the transport ministry that oversees the nation’s roads and railways said the only likely measure for transportation companies would be to ask potential passengers to refrain from traveling.

The provisions of the special measures law allow prefectural governors to request that local residents refrain from leaving their homes and ask organizers to hold off on large events.

Although some government officials believe that such public statements would have some effect, there are no penalty provisions for those who disregard the requests.

About the only penalties contained in the special measures law relate to failure to follow an injunction to store medical supplies and face masks.

While government officials insist that a coercive lockdown that deprives residents of freedom of movement was not possible, others point out that past requests made by Abe to close schools and refrain from holding large events have for the most part been heeded, even though those requests were not legally binding.

Pandemic sets back ‘hikikomori’ trying to return to society