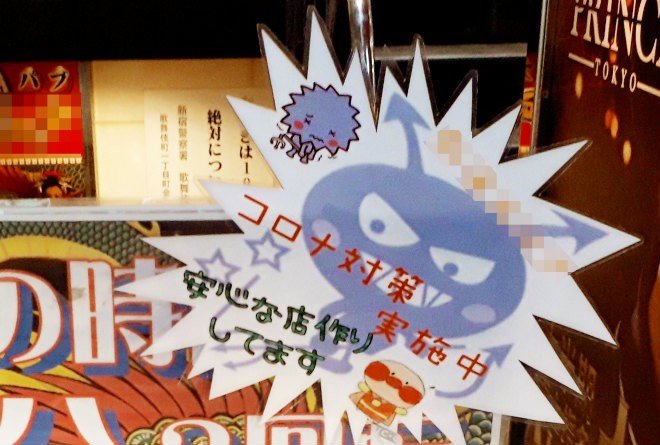 A sign at a bar says that it is conducting anti-virus efforts in the Kabukicho entertainment district in Tokyo’s Shinjuku Ward on March 26. Part of the photo is blurred. (Natsuki Edogawa)

The governor issued the request at an emergency news conference on March 30.

Koike urged young people in particular not to go to drinking spots for the time being and avoid karaoke rooms and live music clubs.

“Now is the critical time to decide if the spread of the infection can be contained or not,” Koike said. “The number of infected people whose routes of infection are unknown is increasing.”

Koike also moved to ally business owners' concerns over losing revenue due to the request with the announcement of a support policy for affected establishments including bars, restaurants and accommodation facilities.

An increasing number of people in the capital are suspected of having been infected with the deadly virus at all-night watering holes such as bars, nightclubs and pubs.

A total of 38 confirmed infections in Tokyo have been traced to such establishments, an expert on the health ministry’s task force said at the news conference.

On March 25, Koike asked residents to work at home on weekdays as much as possible, and refrain from going out at night and on the weekends.

To date, Koike has called for the public to maintain the practice until around April 12.