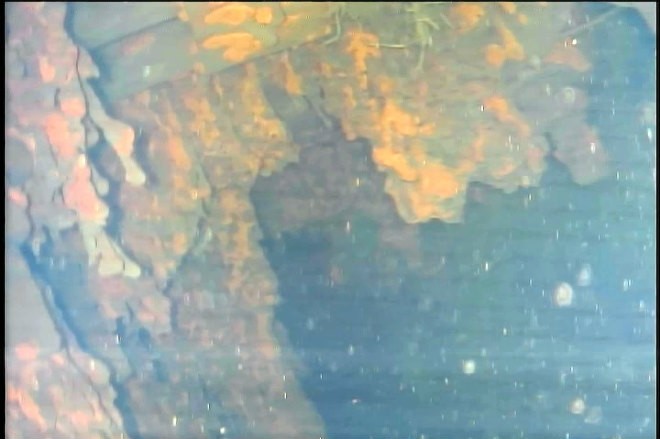 A video image shows what appears to be melted nuclear fuel within the No. 3 reactor at the Fukushima No. 1 nuclear power plant. (Provided by International Research Institute for Nuclear Decommissioning)

Tokyo Electric Power Co. estimates that 1.37 trillion yen ($12.6 billion) will be needed over 12 years to remove melted nuclear fuel from reactors at the crippled Fukushima No. 1 nuclear power plant.

TEPCO's announcement on March 30 covers only two of the three reactors that suffered meltdowns triggered by the 2011 Great East Japan Earthquake and tsunami.

No estimate was attempted for the cost to prepare for the removal of melted nuclear fuel from the No. 1 reactor. The situation at that reactor is the most difficult among the three reactors, and TEPCO officials are still struggling to come up with a plan for removing the debris from within.

The estimate covers the period between fiscal 2020 and fiscal 2031. Of that amount, 350 billion yen will be applied as a special loss to the company’s balance statement for the fiscal year ending March 31, 2020.

The utility had already released its plan for decommissioning the three reactors, which foresaw a start to removing melted nuclear fuel from the No. 2 reactor before the end of 2021, while removal would begin for the No. 3 reactor by 2031.

In announcing its expected profits for the current fiscal year, TEPCO also outlined its estimated expenses for melted fuel removal over the next 12 years.

A total of 330 billion would be needed as preparatory measures, such as further examining the interior of the No. 2 reactor and decontaminating radiation from the area around the three reactors.

The construction cost would be written off as a special loss from TEPCO’s balance statement in the fiscal year when the work takes place.

TEPCO forecasts a net profit of 79 billion yen for the current fiscal year, a decrease of 66 percent from fiscal 2019. Sales are expected to decrease by 2.2 percent to 6.199 trillion yen.