Coronavirus cases continue to climb with single-day record of 243 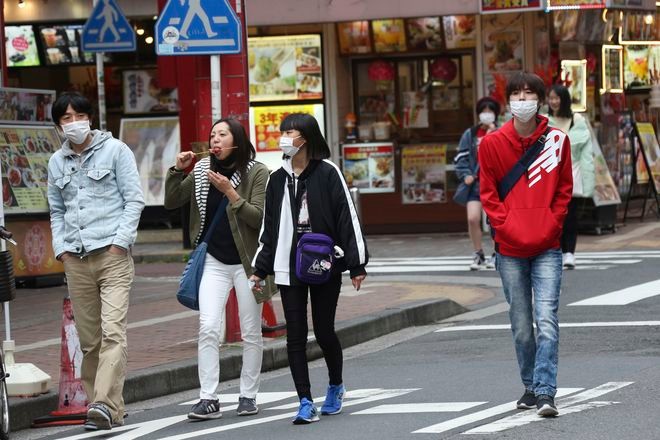 People wearing face masks to protect against the spread of the new coronavirus walk at China Town in Yokohama, near Tokyo, on March 31. (AP Photo)

A record 243 people tested positive for the novel coronavirus across Japan on March 31, including a new single-day high of 78 in Tokyo and the first confirmed COVID-19 case in Yamagata Prefecture.

Patient numbers spiked in Osaka Prefecture, with 28 newly confirmed infections, as well as 17 in Fukuoka Prefecture and 15 in Saitama Prefecture.

Tokyo’s Metropolitan Police Department on March 31 announced that a male employee at the Samezu Driver’s License Center was infected with the new coronavirus.

Police shut down the center located in Tokyo’s Shinagawa Ward and suspended services for acquisition and renewal of various licenses on April 1.

In Kochi Prefecture, a male police officer working at the Sukumo Police Station tested positive for the new coronavirus. Only a limited number of officers have been allowed to enter the station since the test result became known.

Three Kyoto Sangyo University students who returned from vacation in Europe and attended parties in Kyoto have caused a spread of the disease beyond the university’s campus.

Eleven people who had close contact with them were infected with COVID-19. A total of 22 students and alumni had tested positive as of 9 p.m. on March 31.

At a care facility for people with disabilities in the town of Tonosho in Chiba Prefecture, seven people tested positive on March 31.

In Ehime Prefecture, four people who attended the same funeral services in Matsuyama were confirmed infected.

In Tokyo, the spread of the disease among younger people was notable.

Also disturbing is that the route of infection was unknown for 49 of the positive tests.

The total number of confirmed cases in Tokyo has reached 521.

“The fact remains that we are on the verge of a crisis,” Tokyo Governor Yuriko Koike told reporters on March 31. “It is an extremely worrying situation.”