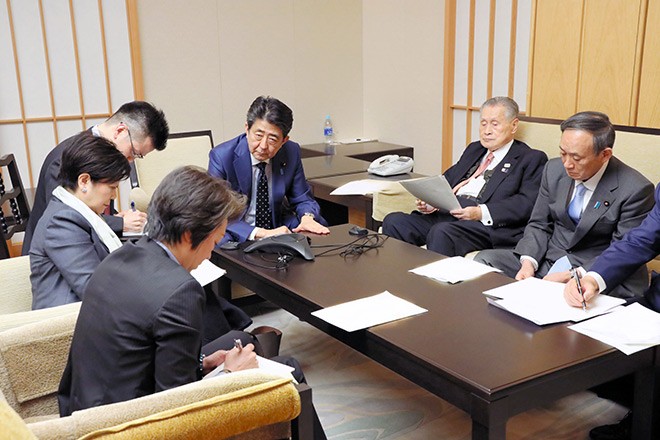 Prime Minister Shinzo Abe pushed for a one-year delay of the Tokyo Olympics rather than two during talks with the head of the Olympic organizing committee.

A two-year delay would have blown past his tenure as leader of his party, which comes up in September 2021. But the prime minister downplayed that fact when discussing the options.

Yoshiro Mori, president of the organizing committee, said in an interview with The Asahi Shimbun on March 31 that there was an option to postpone the Games by two years in light of the new coronavirus pandemic.

But he accepted Abe’s insistence of a one-year delay when the two met for talks on the evening of March 24, before the prime minister’s scheduled conference call with Thomas Bach, president of the International Olympic Committee, over a possible postponement.

“I felt that he gambled on 2021,” said Mori, a former prime minister from Abe’s Liberal Democratic Party.

Mori, 82, said Abe asked him to come to his official residence 30 minutes before the conference call with Bach.

Abe argued during the talks that the Games should be delayed by a year or so.

Mori surmised that Abe asked him over to gauge his reaction to a one-year delay.

One was: “Would not it be better to postpone the Games by two years?”

Mori was worried that the coronavirus might still be raging, but the prime minister was confident Japan would be able to control the outbreaks with a new vaccine.

Abe was confident that COVID-19 will be brought under control by the time Tokyo hosts the Games, now set for July 2021.

Another question was: “Do we need to take the political calendar into account?”

Mori was referring to the fact that Abe’s three-year term as president of the LDP ends in September 2021.

In reply, Abe said with a smile, “Don’t worry about it so much.”

Because the prime minister was so determined in his push for a one-year delay and no later, Mori felt Abe rolled the dice on holding the Games in 2021.

Some board members of the organizing committee advocated a two-year postponement.

Mori considered it as a possibility, but he did not propose it to the IOC.

The Beijing Winter Olympic Games are due to open in 2022. Two years later, the Summer Games will be held in Paris.

“I thought it would be better for the IOC to avoid a situation where two Olympics are held in the same year,” he said.

But a crucial question remains over whether the coronavirus pandemic will be under control by summer next year. If not, what would happen to the Tokyo Olympics? Would it be rescheduled again or canceled?

“I don’t want to think about it now,” Mori said. “We gambled on 2021. Humanity would go extinct if there were not advancement of science and technology.”