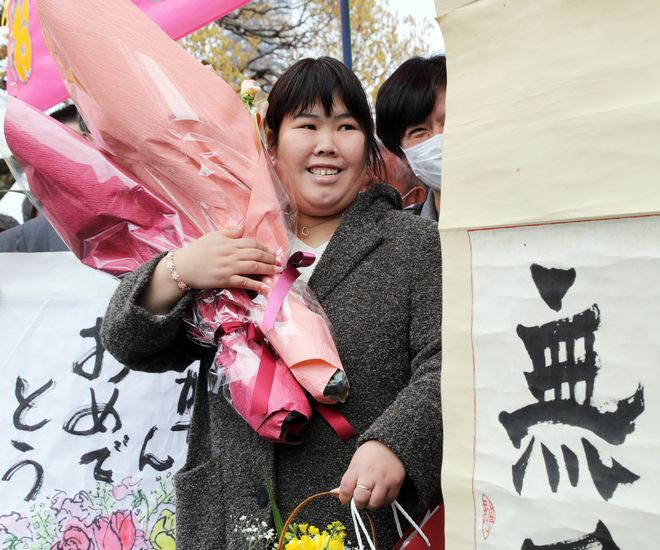 Mika Nishiyama meets with supporters and reporters after her acquittal in Otsu on March 31. (Toyokazu Kosugi)

OTSU--The Otsu District Court admonished investigators and acquitted a former assistant nurse who spent 12 years in prison for a “murder” that was likely a death by natural causes.

Mika Nishiyama, 40, served her full sentence after being convicted of murdering a 72-year-old patient at Koto Memorial Hospital in Higashi-Omi, Shiga Prefecture, in 2003. After her release from prison in August 2017, she continued her attempts to clear her name.

At her retrial on March 31, Presiding Judge Naoki Onishi said the evidence used against Nishiyama was flimsy and her confession was unreliable.

“If just one of the things, including the investigation and the disclosure of evidence, was done appropriately, her arrest and indictment might not have happened,” Onishi said in his 10-minute criticism of the investigation.

He also said, “We must not waste the 15 lost years of Nishiyama’s life by failing to improve the criminal justice system.”

Nishiyama was arrested and indicted in July 2004 on a charge of murder. Investigators said she killed the male patient by removing his respiratory apparatus at the hospital.

In November 2005, the Otsu District Court sentenced her to 12 years in prison.

On her second request, the Osaka High Court in December 2017 granted her a retrial and sent the case back to the district court. The high court had pointed out that the patient might have died of natural causes.

The March 31 ruling focused on the cause of death.

It pointed out that the anatomist’s examination of the deceased that was used as evidence was not trustworthy because it was based on doubtful information provided by the police.

The district court also said the patient may have died because of his irregular heartbeat.

In addition, the judge rejected the veracity of the confession that was used to convict her.

Nishiyama’s defense lawyers said she has mild developmental disorders, which make her feel compelled to satisfy the needs of others.

The court raised the possibility that a detective took advantage of her feelings of affection toward an investigator and induced her to confess to a crime that she did not commit.

“Even the possibility of crime was not proven, and there is no evidence that she committed a crime,” Onishi said.

He added, “The people involved in criminal justice should think seriously ... and improve the system.”

After the ruling, the defense team asked prosecutors not to appeal.

“We would like to carefully look at the contents of the ruling and take the appropriate action,” Mayumi Yamagami, a deputy chief prosecutor, said.

Takahiro Ishii, managing director of the detective planning section of the Shiga prefectural police, said, “We take the ruling seriously and would like to improve how we investigate.”

He did not offer any apology to Nishiyama nor provide measures on how to prevent a recurrence.

(This article was written by Yuto Yoneda, Hiraku Higa and Senichiro Ando.)