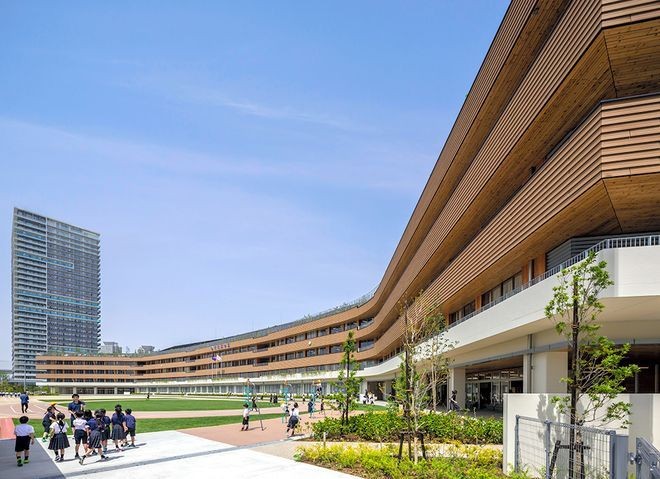 Demand for using fireproof wood designs to build large structures, including the new National Stadium, is heating up in Japan.

The material, called Moen-Wood, makes it possible to erect large buildings made of timber.

Takenaka Corp., the Osaka-based developer of the new construction material, successfully built a wood-based commercial complex and office building in Yokohama and Osaka, respectively, in 2013--the first of its kind in the nation.

“The challenge was how to address the contradiction: making inflammable wood uninflammable,” said Hirokazu Ohashi, 59, a lead researcher for the fireproof technology team at the Takenaka Research and Development Institute.

The wood pillars and beams made using this method consist of three layers: the core, which is made of glued, laminated wood to support the building’s weight; the heat-absorbing protective mortar layer around the center; and the outer wood formation.

When exposed to fire, the outermost layer of wood will burn and carbonize, making it difficult for heat to pass through. The core wood area then does not catch fire because the mortar section absorbs the heat.

Even after subjected to extreme heat for one to two hours, the Moen-Wood does not burn away. The fire will then die down in an instant.

Developing the material, however, was not without its setbacks.

The Building Standards Law, enacted in 1950 to prevent fires and the collapse of buildings following earthquakes, bans using wood to build structures taller than 13 meters. Under the law, heights of eaves of wooden buildings must also be 9 meters or shorter.

The legislation was updated in 2000 to allow large buildings to be built with timber, even in downtowns and other designated urban fire-resistant zones, if the structures can withstand fire for a set amount of time.

Takenaka started a joint program in 2003 with another contractor, Obayashi Corp., to develop a wood-building material.

The resistance of iron and gypsum--a material used to make drywall--were both tested for fire resistance repeatedly as a cover for the beam’s core.

When the timber was not dense enough, and when the core’s protective layer suffered from various problems, the finished material burnt away. Even some seemingly highly promising prototypes turned to ash.

After much trial and error, the innovative technology was completed in 2008. The two companies have since refined it, separately.

The invention did not receive a warm welcome when presented at academic conferences. It was unclear if or when the technology would be adopted for actual buildings.

“I prepared myself for the possibility that the technique might never be used,” Ohashi said.

The turning point for the technology was in 2010, when a law promoting wood as a building material was brought into force.

Moen-Wood was later developed for buildings with up to 14 stories. Nine structures have been built so far using Moen-Wood and another seven are planned.

The growing use of timber is expected to lead to the planting of more trees, resulting in an increase in absorption of carbon dioxide, and rehabilitating both forests and forestry.

Ohashi explained another advantage of buildings made of Moen-Wood: “The soft touch and warmth of wood will enrich people’s lives.”

Established in 1610 as the first “komuten” construction contractor in the early Edo Period (1603-1867), Takenaka plans, designs, installs and manages buildings.