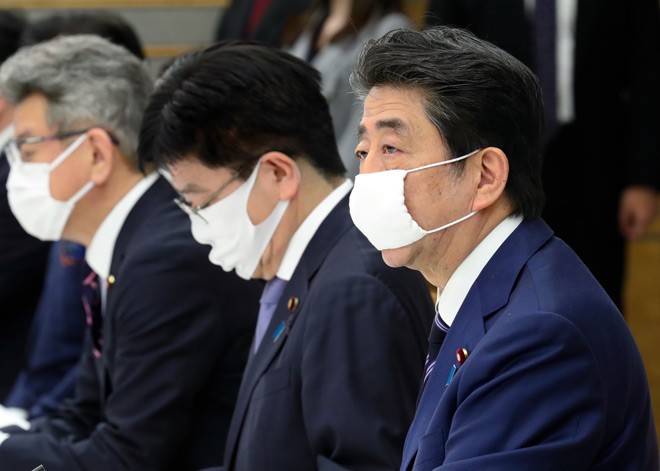 Prime Minister Shinzo Abe announces his plan to distribute cloth face masks to all households in Japan at an April 1 meeting of the government task force responding to the coronavirus outbreak. (Takeshi Iwashita)

In a nation suffering from chronic shortages of face masks at drug stores and retail outlets, Prime Minister Shinzo Abe's solution seemed a perfect fit, at least to him.

Abe announced on April 1 that all households in Japan would each receive two cloth face masks, which can be washed and repeatedly reused.

However, the sudden decision came under online ridicule. Even some government officials were raising their eyebrows about how effective the giveaway would be in fighting the novel coronavirus.

During an April 1 meeting of the government task force responding to the growing outbreak, Abe said, “To deal with the sudden increase in demand for face masks, an extremely effective measure” would be to distribute two face masks to each of the 50 million or so households in Japan.

But there are hurdles to implementing the giveaway.

The distribution will begin in two weeks from the prefectures with the largest number of coronavirus infections. But there is no knowing when all households will receive the cloth face masks.

“It is better than doing nothing,” one high-ranking government official shrugged.

At his morning news conference on April 2, Chief Cabinet Secretary Yoshihide Suga was asked for the rationale behind the two face masks per household plan.

He explained the number was based on the average number of household members. The delivery network of the Japan Post Group would be used to directly distribute the face masks into the mailboxes of each household.

Suga said each face mask would cost about 200 yen ($1.90), but there was no indication of what the total cost, including delivery expenses, would be.

The project will be included in the package of emergency economic measures to be announced next week. Reserve funds in the budget would be used to pay for the face masks.

Suga did not respond to a question about whether the project was Abe’s idea.

WHERE HAVE ALL THE MASKS GONE?

The government has also created a “mask team” made up of about 40 civil servants from the health, economy and internal affairs ministries.

Despite such efforts, the shortage at retail outlets continues, leading high-ranking government officials to ponder what has happened to all the face masks.

Amid the criticism that the government has been slow in responding to the coronavirus outbreak, some government officials were wondering if the face mask distribution project was the most appropriate at this time.

“While people may be happy about receiving the face masks, I have differing views about whether (it is a priority measure),” said one government official.

One member of the ruling Liberal Democratic Party said, “It is only a publicity stunt to make it appear as though the government is doing something. The government likely wants to counter criticism about the shortage of face masks, but I cannot help but feel it will have the opposite effect.”

Meanwhile, some experts were casting doubt on how effective cloth face masks are in preventing the spread of coronavirus infections.

Tetsukazu Yahara, a professor of life sciences at Kyushu University, said it was inappropriate to distribute cloth face masks to households or to ask families to make such masks so their children could use them at school.

He said the coarse-woven cloth would not keep out airborne droplets and that repeatedly washing the face mask would be unsanitary because germs might remain if the washing was not thorough.

The World Health Organization also does not recommend using cloth face masks when the coronavirus is at a stage of increasing the number of infections.

The hashtag at the top of the social media trend rankings played off the Abenomics package of economic measures to stimulate the economy and used #Abenomask instead.

While some posts expressed gratitude for the plan, with one poster expressing appreciation for receiving the face masks, others were more negative, with another popular trending post slamming the government for trying to deceive the public with just two face masks.

Others called for government compensation for businesses that have had to suspend operations because of the coronavirus.

A 44-year-old woman in Tokyo lives with six other family members.

“What will we do with just two?” she said. “Although I do not want to ask for as many face masks as family members, I think there is something wrong about giving the same number to all households.”

Another group was critical of the plan to use Japan Post to deliver the face masks.

Tenohasi is a nonprofit organization that provides assistance to the impoverished in Tokyo. Kenji Seino, the group’s secretary-general, worries about whether the homeless or those who regularly spend nights at internet cafes will receive the face masks.

“There are people who not only do not have face masks, but are in an environment that does not allow them to remain at home,” Seino said.

The Airin district in Osaka’s Nishinari Ward is known for its flophouses and large number of day laborers who do not have a regular address they can call home.

A 49-year-old man who works for an organization that provides support to such people said, “It appears to me to be only a ploy by Prime Minister Abe since it is a policy that will not even give everyone in Japan the face masks.”

He said the government should think up a framework to ensure that each individual receives the face masks.

“I cannot understand the logic behind two face masks for each household,” the man said. “It is a pathetic impromptu measure.”

Meanwhile, officials of Kitami in Hokkaido, the main northern island, know all too well how easy it is to turn what looks like a good idea into a major embarrassment.

In March, when the city experienced a sharp increase in coronavirus infections, delivery people with the Japan Post Group distributed envelopes containing seven face masks to the households in the city. The plan was not designed to distribute the envelopes to all households based on residential registers, but simply involved distributing the envelopes into the mailboxes of single-family homes and apartment complexes.

Over the course of a month, Kitami city government officials received about 250 complaints from local residents, with some saying they never got the face masks and others reporting receiving only enough for one household when two households resided in the same domicile.

Because no names were attached to the envelope, some university students living away from home never got the face masks. At one senior citizens’ facility, the entire building received just seven face masks.

(This article was compiled from reports by Eisuke Eguchi, Kazutaka Kamizawa and Akiko Okazaki.)