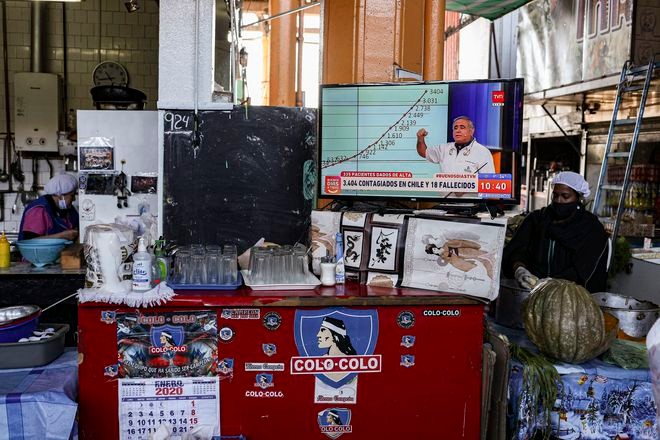 A monitor shows a news channel's graph of rising cases of the new coronavirus, on display at a food stand inside the La Vega market in Santiago, Chile, on April 2. (AP Photo)

Global coronavirus cases surpassed 1 million on Thursday as the pandemic explodes in the United States and the death toll continues to climb in Italy and Spain, according to a tally by Johns Hopkins University.

The virus has killed more than 51,000 globally with the largest number of deaths in Italy, followed by Spain and the United States, the Baltimore university's Center for System Science and Engineering reported.

It said more than 200,000 people had recovered from the disease, more than 75,000 of them in China where the virus was first recorded late last year.

The first 100,000 cases were reported in around 55 days and the first 500,000 in 76 days, according to a Reuters tally based on official records. Cases doubled to 1 million within the past eight days, Reuters' data showed.

As the pandemic has spread around the world, governments have closed factories and businesses, grounded airlines and ordered hundreds of millions of people to stay at home to try to slow the contagion.

Handouts of up to 1.5 million yen in cards for those in entertainment