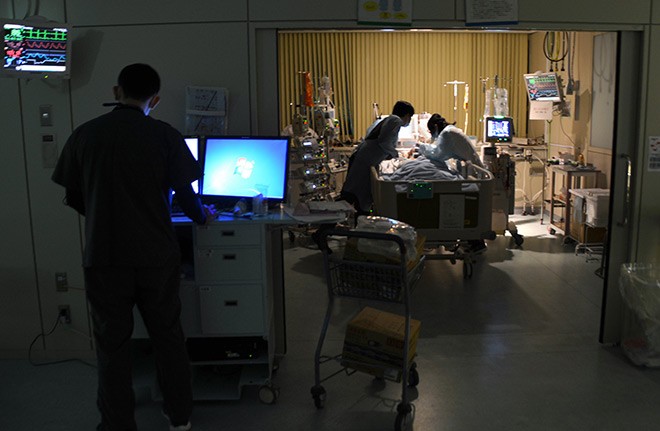 A medical organization is warning that coronavirus-related deaths could skyrocket because of a potential shortage of intensive care facilities.

The Japanese Society of Intensive Care Medicine (JSICM) on April 1 warned in a statement that there may not even be 1,000 available beds in ICUs around Japan capable of handling new coronavirus patients who develop serious symptoms.

The problem is not just that there could not be enough ICU beds to meet the expected demand. There are also not enough medical personnel who have the know-how and skills to handle the complicated equipment required to care for patients with severe symptoms, who are placed on ventilators in ICUs.

Those who develop more severe forms of pneumonia may be placed on extracorporeal membrane oxygenation (ECMO) devices, which circulate the patient’s blood through an artificial lung.

Japan has always had a more fragile ICU structure compared to Western nations. There are only five ICU beds per 100,000 people in Japan, and typically one nurse is assigned to oversee two patients in intensive care.

In most advanced nations, each ICU patient has a nurse caring for them. The number of ICU beds in Germany is about six times that of Japan. Even Italy, which has so far suffered the most fatalities from the coronavirus outbreak, and whose medical system is under enormous strain, has about double the number of ICU beds as Japan.

The JSICM statement said there will come a point where two nurses will be needed to take care of a single patient with serious symptoms from the coronavirus. It also warns of a shortage of doctors who can operate ventilators needed to assist patients with severe cases of pneumonia.

There are an estimated 6,500 ICU beds in Japan. But excluding those needed to treat other illnesses, the medical organization said fewer than 1,000 ICU beds are available to deal with serious cases of coronavirus infection.

The health ministry calculates the peak number of serious cases daily once the coronavirus reaches an epidemic stage in Japan would be 700 in Tokyo and 500 in Osaka. The two prefectures alone in that scenario could outstrip supply.

The central government is intensifying efforts to obtain more ventilators.

But Osamu Nishida, JSICM’s president, said the number of machines is not so much the problem.

“Setting up a ventilator to help patients with breathing problems is very complicated, so this is not simply an issue of the number of machines,” he said. “The medical care system will collapse because a sharp increase in patients will quickly lead to manpower shortages.”

The health ministry is asking hospital organizations to call on doctors, nurses and clinical technicians who have experience operating ventilators to teach other medical personnel how to use the machines.

The government is asking manufacturers to increase production or imports of ventilators and ECMO devices. And it plans to provide financial support to medical institutions that install the equipment.

Yasutoshi Nishimura, the minister of state in charge of economic revitalization, said on April 2 those kinds of financial support will be included in the package of emergency economic measures to be announced next week.

Companies producing the equipment that expand production would receive subsidies.

There were about 22,000 ventilators in Japan as of mid-February, according to a special survey conducted by the Japanese Society of Respiratory Care Medicine. Of that number, about 13,000 were not being used. Of the 1,400 or so ECMO machines, about 1,250 were not in use.

However, with the number of coronavirus infections increasing in large numbers every day, government officials believe much more equipment is needed.

An official with Nihon Kohden Corp., which imports and sells ventilators, said there has been “greater demand globally, so we are unsure if we will be able to procure the needed numbers.”

Most manufacturers in Japan are small businesses that would face difficulties in greatly expanding production.

It is also difficult for companies in other fields to enter the sector because of the high degree of safety required in manufacturing them.

ECMO machines used in Japan are almost all manufactured domestically. Terumo Corp., which has a 70 percent market share, is seeking to double its production. It currently makes 150 machines a year.

But a company official said there would still be a need for more medical care providers able to operate them.

(This article was compiled from reports by Akiyoshi Abe, Ayumi Shintaku, Dai Nagata and Eisuke Eguchi.)