Microbes in Earth’s crust point to primitive life on Mars 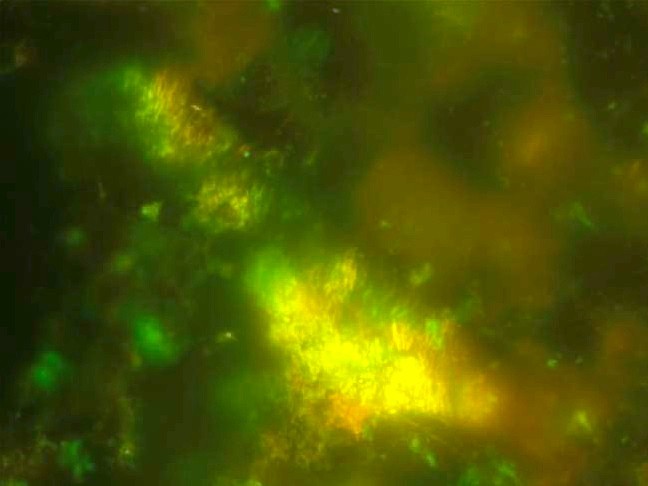 A fluorescent micrograph scope shows clay formations along cracks in basalt rock. Green indicates the presence of microbes, while orange depicts clay. Both coexist in the yellow colored area. (Provided by researchers)

Life on Mars? Planet Earth has turned up tantalizing evidence that there could be after researchers found dense concentrations of microbial cells in cracks of ancient crust deep below the seabed.

A team led by Yohei Suzuki, an associate professor of earth and planetary science at the University of Tokyo, believes the finding points to possible primitive life on the Red planet.

The team's findings were published April 2 in Communications Biology, an online science journal.

Researchers said the density of microbes found deep below the seabed was comparable to that in the human intestine.

The presence of plentiful microbial life in basalt rocks formed in ancient times in ocean depths, where energy sources such as light and hot water--key ingredients to sustain life are scarce--stunned the researchers.

Such an extreme situation could exist on Mars, which suggests the possibility that primitive microbial life could be found there, the researchers said.

Samples were collected from about 100 meters below the seabed of the South Pacific Ocean. The water in the area is about 5,000 meters deep. The research was undertaken as part of an International Ocean Discovery Program (IODP).

When rock cracks in the deep sea, clay forms as a natural reaction with seawater.

The researchers examined core samples taken from the seabed that contained clay taken from the rocks and estimated the number of microbial cells based on the distribution of elements.

They were astonished to discover concentrations of more than 10 billion microbes per cubic centimeter, equivalent to the density found in a human intestine.

A DNA analysis showed that the microbes are closely related to a bacterium that uses organic substances as an energy source, the researchers said.

“It was widely known that microbes exist in basalt rocks that were formed at a younger age date,” said Fumio Inagaki, a member of the research team who also heads the Mantle Drilling Promotion Office at Japan Agency for Marine-Earth Science and Technology (JAMSTEC). “But we never thought that microbes were present in such high densities in basalt rocks 100 million years old and at the bottom of an ocean area where the energy supply is low.”

It is believed that the crust on Mars is covered with basalt rock created by volcanic activity that occurred up until 3.7 billion years ago.

Scientists also believe that clay was formed by a reaction with water on Mars up until 3 billion years ago.

There is strong evidence that water still flows underground on Mars.

“Cracks in basalt rocks will become an important target in trying to detect life on Mars,” Suzuki said.