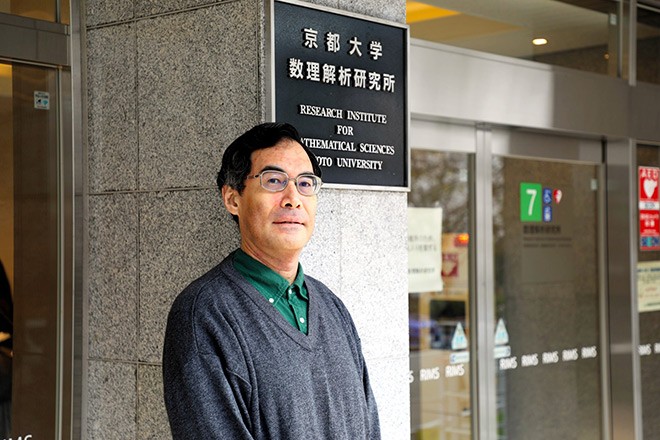 KYOTO--A professor of advanced mathematics at Kyoto University has finally cracked a mathematical proposition, or conjecture, that had remained unsolved for 35 years.

But Shinichi Mochizuki had to wait more than seven years before outside experts could confirm that academic papers in which he outlined his solution were in fact correct.

Mochizuki, 51, is a professor at Kyoto University’s Research Institute for Mathematical Sciences (RIMS).

Kyoto University officials announced April 3 that the papers would be published soon in an internationally recognized journal.

Experts said Mochizuki’s proof is similar in importance to groundbreaking solutions to other protracted math problems, such as Fermat's Last Theorem, which was solved in 1995, and the Poincare Conjecture, which was resolved in 2006.

His achievement is on a scale that would warrant Mochizuki being awarded the Fields Medal, considered the Nobel Prize for mathematicians.

In August 2012, Mochizuki posted four articles to prove what has been called "ABC Conjecture" because it deals with the relationship that arises when three positive integers referred to as a, b and c are such that the sum of a and b is c. Moreover, multiplying the prime factors of a, b and c leads to d. The problem revolved around proving why there were such few cases of c being larger than d.

Editors of the journal of RIMS asked outside experts to peer review the articles for any problems.

In late 2017, it appeared that the articles would be published, but mathematicians in the West pointed out what they considered inappropriate leaps in logic in a core portion of the articles.

That led the journal editorial board to continue with their assessment. A number of other outside experts were consulted and it was only in February that Mochizuki’s proof was considered to no longer have any problems.

Mochizuki has had a brilliant career, graduating from Princeton University in the United States when he was 19 and becoming a RIMS professor at 32.

He spent nearly 10 years working alone on what he calls "Inter-universal Teichmuller (IUT) Theory," which combines elements of algebra with geometry, as one way of getting at the ABC Conjecture.

Mochizuki's proof could be used to solve other math problems because IUT Theory goes beyond the now accepted framework for mathematics.