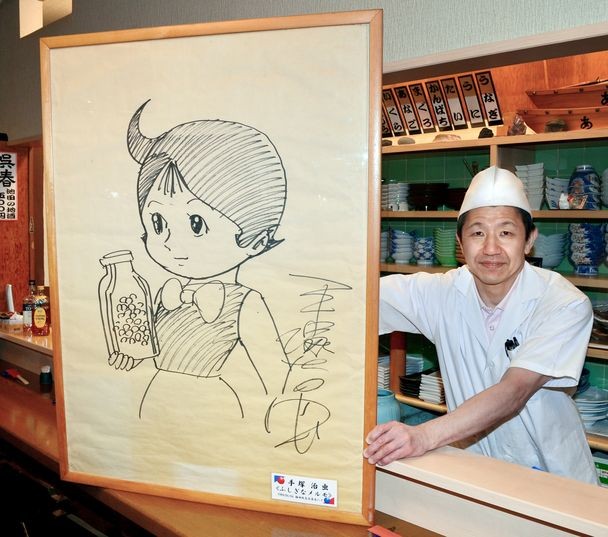 Hirohiko Bando shows off a drawing of Melmo, which was hand-drawn by Osamu Tezuka 36 years ago, in his sushi restaurant in the Sakuragaoka district of Minoo, Osaka Prefecture. (Makoto Ukai)

MINOO, Osaka Prefecture--When high school boy Hirohiko Bando saw some strands of hair being sketched, he instantly knew that the drawing was of the popular manga character Melmo.

Today, more than three decades later, that finished drawing is displayed at a sushi restaurant here managed by Bando, the second-generation proprietor.

"Many of Tezuka's manga works deal with issues that are still relevant today, such as robots, artificial intelligence, ecological destruction and euthanasia," said Bando, 54. "I hope the drawing will prompt fans to teach young people about Tezuka."

Bando's restaurant, Asahi, is located in a residential area of the city's Sakuragaoka district. The illustration of Melmo, about 80 centimeters by about 60 cm, is mounted in a frame measuring approximately 110 cm by 80 cm.

It hangs on a wall in the hallway to the restroom from the counter.

The protagonist of the "Marvelous Melmo" manga series, which ran about 50 years ago and also spawned a popular animated TV series adaptation, was drawn with an oil-based pen. The illustration contains the signature of Tezuka, who was born in Toyonaka, Osaka Prefecture, and grew up in Takarazuka, Hyogo Prefecture, in the lower right corner.

"It is rare for a hand-drawn illustration featuring a character of this size to remain in good condition. It is valuable and priceless," said Kenichi Tsukuda, 29, a fan club member well-versed in Tezuka's works who lives in Toyonaka.

Bando has always loved Tezuka's works. Thirty-six years ago when he was a third-year senior high school student, he attended an event featuring the manga maestro at the Hankyu Department Store in Osaka's Umeda district on a winter day.

After Tezuka gave a lecture, a contest was held for participants to guess which popular character he was drawing on a piece of paper. As soon as Tezuka drew a few strands of hair spreading downward, Bando raised his hand. Tezuka called on the boy, who gave the correct answer.

The artist quickly finished the drawing and shook hands with Bando, giving him his prize.

"I knew it right away because I was also watching the anime," Bando recalled. "I still remember his grip when we shook hands, which was a little too firm. It was like a dream."

When Bando started helping his father run a sushi parlor in Ikeda, also in Osaka Prefecture, about 30 years ago, he asked for permission to put his "treasure" on display on a wall in the hallway.

Even after the restaurant moved to its current location about 10 years ago, Bando hung the drawing on a wall in a less conspicuous spot of the hallway so that fans could quietly appreciate the piece.

It remains there even after he took over the establishment two years ago.

"My generation grew up watching 'Astro Boy' (TV anime series), and I feel the Showa Era (1926-1989) from this drawing," said Satoshi Tanaka, 60, a self-employed neighbor who frequents the restaurant. "It is a healing space that transcends time."