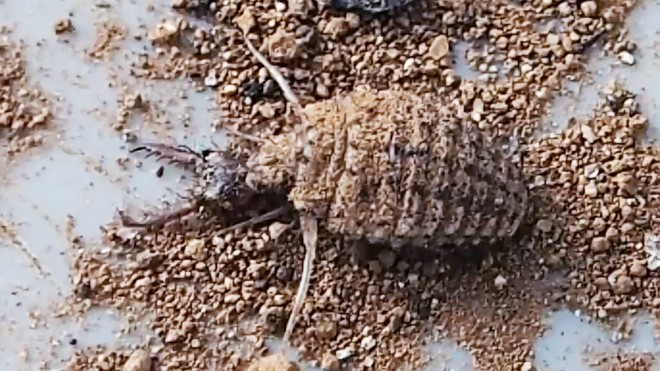 Tiny, funnel-shaped holes were visible here and there on the ground. They varied in size and depth, but the base of all were a near-perfect circle.

Ibuki Inuzuka, 15, a first-year high school student in Hamamatsu, Shizuoka Prefecture, showed me a bunch of pits freshly dug by antlion larvae. The pits are known as “arijigoku” (hell for ants) in Japan.

Inuzuka has long been fascinated by insects. She became interested in them in the summer of her second year at elementary school, when she started watching antlion larvae dig pits at her grandparents’ home in the city’s Tenryu Ward to find out how they trapped passing ants.

As part of her independent research projects, Inuzuka has reported the results of what she's seen every summer, including her observations of adult antlions, or antlion lacewings, known as “usubakagero” in Japan.

Inuzuka scoured illustrated reference books on insects to learn more about antlions, but found that compared to descriptions of popular insects like stag beetles or butterflies, there wasn't much information on them.

Inuzuka then embarked on her own study of the ecology of antlions by breeding them and has carried out a range of experiments. One of her findings was that antlions can capture more ants when they dig pits in fine, dry sand.

She also discovered that antlion larvae start digging pits almost simultaneously in the spring, about 20 days before ants become active.

I read Inuzuka's report on her observations of antlions written when she was a third-year junior high school student. Its standards of quality were as high as a university student’s graduation thesis.

I'm both envious and amazed at the tenacity and passion with which she has kept studying just one species of insects through her elementary and junior high school years.

This spring, humankind seems to be in a state of panic due to a totally unexpected new infectious disease.

At a time when most people are having ants in their pants, watching the down-to-earth behavior of antlion larvae offers a precious moment of relaxation.

We could probably say, “Though faces change year in, year out, the antlion larvae always look the same.”

Using a trick I learned from Inuzuka, I scooped one of the master diggers out of a pit where it had buried itself, and holding it from underneath, put it on my palm for observation.