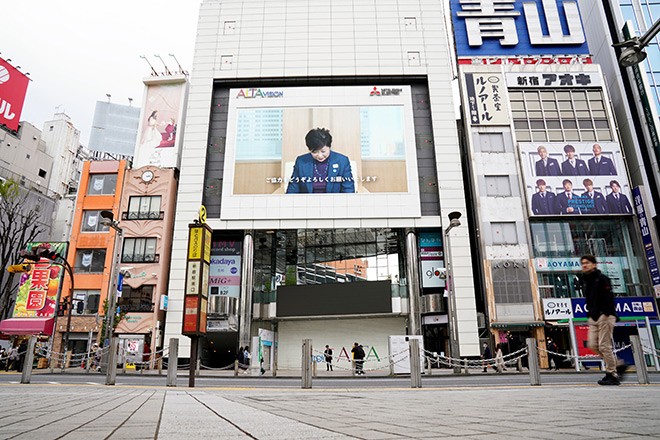 A large monitor in front of Shinjuku Station runs footage of Tokyo Governor Yuriko Koike urging residents to take precautions to slow the spread of the new coronavirus on April 5. (Ryo Kato)

Health experts warned that Tokyo is teeming with people who are unknowingly infected with the new coronavirus as the capital on April 5 reported a new daily high of 143 infections, the second straight day of cases topping the 100 mark.

Overall, Tokyo now has 1,033 confirmed cases of infection, more than any other prefecture in Japan.

The metropolitan government also reported seven deaths from the coronavirus the same day, bringing the nation’s death toll to more than 100.

Tokyo Governor Yuriko Koike stepped up her call for residents to stay at home, particularly at night, to slow the spread of the virus.

“New cases (on April 5) went far beyond the number of the previous day,” she said, referring to 117 infections confirmed on April 4. “And the number of people who cannot be tracked down where they became infected with the virus is rising. I strongly urge you to refrain from going out, particularly at night, unless it is essential.”

Koike made the remarks in a video streamed on the evening of April 5. She warned on March 23 that the next three weeks will be critical in deciding whether to put Tokyo in a "lockdown."

Although the metropolitan government initially reported there were 118 new cases on April 4, it later revised the figure to 117.

Tokyo officials said of the 143 cases, the route of transmission was not clear in 92 of them, or more than 60 percent of the daily total.

Such cases represented nearly 70 percent of the overall number on April 4.

Officials said an increase in the number of new cases whose infection route cannot be ascertained is contributing to the spread of the outbreak in Tokyo.

“The surge may reflect the number of people who became infected with the coronavirus after they let their guard down two weeks ago,” said Atsuro Hamada, a professor of travel medicine with Tokyo Medical University.

“It is difficult to predict the extent of an increase in coming days and when Tokyo will hit the ceiling," Hamada added. "I am afraid that the infection is nearing a prevalent phase, given the rise in the number of cases whose path of infection is not identified.”

The coronavirus infection is spreading throughout Japan, with no signs of slowing down.

Experts warned that hospitals could be overwhelmed with new cases, placing the nation’s health care system at risk. Infections of medical personnel and patients have been reported at some hospitals.

(This article was written by Hajime Mikami and Naoya Kon.)