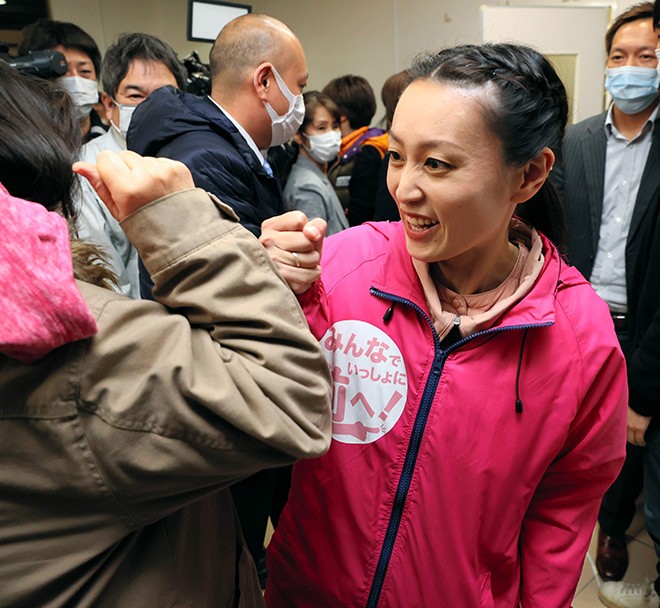 Sawako Naito celebrates her win with her supporters on April 5 in Tokushima. (Jin Nishioka)

“Due to the impact of the new coronavirus, the world has been enveloped in a sense of helplessness," Naito told supporters after her victory. "But we can still transform Tokushima into an exciting city."

She brushed off comments from critics that she might not be physically fit enough for the demands of the job, which include managing the city's response to large-scale disasters.

“There'll be no problems as long as I’m receiving intravenous drips once every five to seven weeks," Naito said.

The drips are to relieve symptoms including numbness in the legs and fatigue, characteristics of the disease, which attacks the central nervous system.

After her victory, Naito vowed to “shatter the notion that people with intractable diseases can’t do the mayor's job."

She said it is “the role of politics” to change the system so it encourages patients with intractable diseases to head a municipal government.

She added she hopes performing her duties will help realize a society where a diverse group of people can play an active role.

Naito developed multiple sclerosis, an intractable disease, at age 20, when she was studying at the Faculty of Law of the University of Tokyo.

In 2008, Naito took the top prize in a business contest for students and the following year published a popular book that gave her take on life while touching on her disease, school and romance.

Naito also established a committee to revitalize her hometown of Tokushima and asked Tokushima Governor Kamon Iizumi to hold a contest to solicit ideas from students, an early indication that she might later find her way into politics.

Naito, who just turned 36 on March 28, takes over as Tokushima's mayor without experience running a public administration or serving in a local assembly.

Prior to her run, Naito served as a member on councils and review committees in Tokushima Prefecture and the prefectural capital in areas including tourism, gender equality, social welfare for persons with disabilities and promotion of education.

Naito breaks the previous record for Japan's youngest female mayor of 36 years and six months set by Naomi Koshi, who won her first mayoral election in Otsu in 2012.

Naito garnered 41,247 votes in the election, while Endo secured 39,248. Both candidates ran as independents without the backing of any party.

Ruling Liberal Democratic Party lawmakers elected from the prefecture were divided over which candidate to support and ended up splitting the conservative vote.

Voter turnout was 38.88 percent, down from the 45.7 percent recorded in the previous election.

All vote counting was concluded on election day.