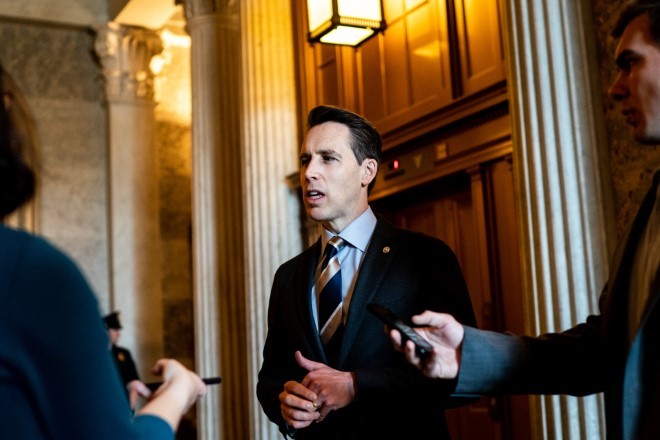 Senator Josh Hawley, Republican of Missouri, talks to reporters on Capitol Hill in Washington, March 18, 2020. A report delivered to Congress last week called for $20.1 billion in equipment, exercises and defense investments to counter China in 2021 and beyond, which Hawley has advocated for. (Erin Schaff/ © 2020 The New York Times)

WASHINGTON--U.S. military officials have outlined a spending request to bolster deterrence against China after the coronavirus pandemic ebbs, a sign of how national security leaders are already studying ways to shore up the country’s standing in the Asia-Pacific region once the outbreak ends.

A report from the U.S. Indo-Pacific Command, delivered to Congress last week, calls for $20.1 billion in additional spending between 2021 and 2026. The funds would be spent on new radar warning systems and cruise missiles, and would also pay for more exercises with allies, deployments of additional forces and new intelligence-sharing centers. The efforts would help improve the U.S. military’s ability to deter the People’s Liberation Army.

The request, which was first reported by Defense News, shows that many in the military believe tensions between the U.S. and China are likely to grow amid the pandemic. President Donald Trump and President Xi Jinping of China cut an uneasy peace in late March, each promising to dial back accusations of who was at fault for the spread of the virus, which is believed to have originated late last year at a market in Wuhan, China. But U.S. intelligence officials have said they expect tensions to flare again, and China to restart its efforts to deflect blame for the virus and spread disinformation about the U.S.’ role in its origin.

While Congress commissioned the report from the Indo-Pacific Command before the coronavirus plunged the world economy into chaos and heightened tensions between the U.S. and China, current and former national security officials said the spending request was more relevant now.

China is sure to use the aftermath of the virus to try to strengthen its hold on the Pacific region, according to lawmakers. But the U.S. will also have an opportunity to shore up its traditional allies.

The pandemic threatens to upend the status quo around the world, particularly in Asia, where the infections began, said Senator Josh Hawley, Republican of Missouri, who has advocated increased military funding for the Pacific region.

“China understands that the global pandemic is an inflection point,” Hawley said. “They are trying to turn this to their advantage. Make no mistake, they are still pursuing their global strategic ambitions. The need for us to laser focus on China’s economic and military ambitions is going to be more urgent once we beat this pandemic, not less.”

Some members of Congress and military strategists have long argued that the Pentagon needed to fund a deterrence initiative in Asia, akin to measures in Europe after Russia annexed Crimea in 2014 and began its war with Ukraine. The European funding paid for new military exercises, the deployment of forces to the Baltic States and Poland, and upgrades to logistic facilities, like ports.

Among the projects proposed in the report is a series of new intelligence-sharing centers. While the U.S. has close intelligence ties with New Zealand and Australia, its partnerships with allies in Southeast Asia are more anemic. The new money would create a counterterrorism center, an Oceania fusion center and other intelligence facilities.

The spending plan also calls for the U.S. to build up its missile defenses in Guam and other parts of the second island chain, which is farther east than the first island chain. It would fund radar installations in Hawaii, Palau and other locations to better track hypersonic missile threats.

The proposal would fund more offensive weaponry such as Navy Tomahawk missiles. Intermediate-range land-based missiles were once banned by international treaties, but the Trump administration withdrew last year from the Intermediate-Range Nuclear Forces Treaty, in part to counter a growing threat from China. The move allows the U.S. to defend Taiwan and other parts of the first island chain.

“In order to change the calculus of our adversary, we must deny them the ability to control the air and sea around the first island chain,” the report says. “U.S. forces must be capable of fighting in highly contested environments against technologically advanced opponents.”

Members of Congress and military strategists have argued that the threat of missiles from China has shown that the U.S. needs to better disperse its forces in Asia, which are largely concentrated in South Korea and Japan.

Representative Mike Gallagher, Republican of Wisconsin, said in an interview that Iran’s missile strikes on U.S. troops at bases in Iraq show the potential vulnerability of forces fixed in a single location.

The U.S. needed to better defend its outposts in the Pacific, like Guam, with new radar and other military equipment, he said.

“This should provide a wake-up call for all Americans to increase defense investments in the Indo-Pacific,” Gallagher said. “Slogans that the Indo-Pacific is the Pentagon’s top priority will remain just that--slogans--until the Pentagon puts resources behind the command.”

The economic destruction from the coronavirus pandemic is likely to put pressure on the defense budget. That will make creating a new pool of funding to build up the U.S. presence in Asia all the more urgent, said Eric Sayers, a former congressional staff member and a senior adviser to the Indo-Pacific Command.

Sayers, who is now a vice president at Beacon Global Strategies, a Washington-based consultancy, has written about the need to increase short-term military spending in the Pacific given Chinese expansion and military activity in the region.

“For all the change we should expect in a post-COVID world, the shifting military balance in Asia and the concern it has created for America’s allies will endure,” Sayers said. “This funding plan for Congress represents a road map for what the nation needs to do to address these operational shortfalls in the Pacific.”