Microplastics the scourge of waterways across Japan 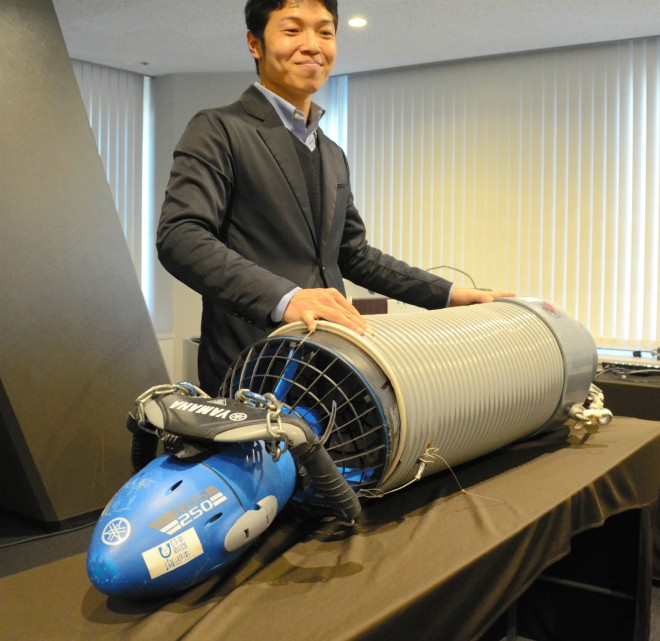 Fujio Kojima, executive director of the Pirika Association, shows off the Albatross VI used to survey water for microplastics, in Tokyo on March 25. (Mutsumi Mitobe)

The nation's waterways are clogged with plastic fragments from all manner of items that endanger local ecosystems, a survey suggests.

The Tokyo-based Pirika Association, a group working to solve environmental issues, said it detected microplastics at 98 of 100 locations it surveyed in waters in the Kanto region or farther south.

It concluded that nearly all rivers, bays and lakes across Japan are seriously threatened.

Pieces of artificial turf, fertilizer ingredients, tarpaulin, rope and other plastic materials were discovered not only in urban areas but also in rural zones, according to the findings.

“We will be looking to build cooperation with companies and industries connected with the manufacture of artificial turf, fertilizer materials and other substances in areas where the reason for the pollution is apparent, in the hope of solving the problem,” said Fujio Kojima, 33, executive director of the group.

From June through November last year, the Pirika Association collected and analyzed plastic fragments measuring 0.3 to 5 millimeters in water sampled with a dedicated net-equipped machine powered by a propeller to traverse waterways in 12 prefectures between the Tokyo metropolitan area and Okinawa.

Of the 98 surveyed sites where microplastics were found, some in Tokyo, Chiba and Toyama prefectures recorded a floating plastic volume more than 50 times higher than the average for all research points.

High readings were reported mainly in harbors and narrow channels where water does not flow fast.

At 75 sites, microplastics deriving from artificial turf were found, accounting for 14.3 percent of all collected plastic pieces. They are believed to have come from sports grounds in most instances.

Parts of plastic bags used to pack fertilizers used in rice paddy cultivation were also identified, and 60 percent of microplastics detected at some study sites in Ishikawa and Toyama prefectures were of that type of material.

The results of the Pirika Association’s research are available online at (https://opendata.plastic.research.pirika.org/).

Plastic contamination in oceans and open waters is already a matter of grave global concern.

Microplastics are generated when plastic products degrade and break down into miniscule pieces by heat from the sun, ultraviolet rays, ocean waves and other elements. As they remain in ocean water for prolonged periods, they poses a huge threat to marine life.