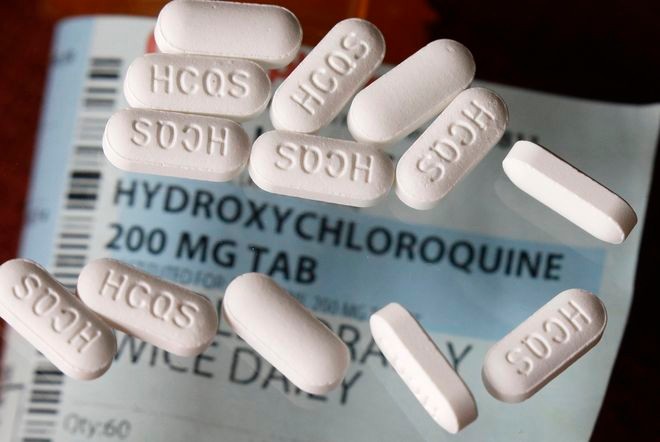 WASHINGTON— President Donald Trump and members of his administration are growing emphatic in promoting an anti-malaria drug not yet officially approved for fighting COVID-19, even though scientists say more testing is needed before it’s proven safe and effective against the virus.

Trump trade adviser Peter Navarro promoted the drug, hydroxychloroquine, in television interviews Monday, a day after Trump publicly put his faith in the drug to lesson the toll of the coronavirus pandemic.

“What do I know, I’m not a doctor," Trump told reporters Sunday. "But I have common sense.”

The administration's promotion of the drug comes after a heated Situation Room meeting of the White House's coronavirus task force on Saturday, in which Navarro challenged the top U.S. infectious disease expert, Dr. Anthony Fauci, over his concerns about recommending the drug based only on unscientific anecdotal evidence.

Navarro, who has no formal medical training, erupted at Fauci, raising his voice and claiming that the reports of studies he collected were enough to recommend the drug widely, according to a person familiar with the exchange who spoke on the condition of anonymity to describe the Situation Room blow-up.

Fauci has repeatedly said that current studies provide only anecdotal findings that the drug works. Navarro told CNN on Monday: "I would have two words for you: ‘second opinion.’”

Hydroxychloroquine is officially approved for treating malaria, rheumatoid arthritis and lupus, but not COVID-19. Small, preliminary studies have suggested it might help prevent the new coronavirus from entering cells and possibly help patients clear the virus sooner. But those have shown mixed results.

Doctors are already prescribing the malaria drug to patients with COVID-19, a practice known as off-label prescribing. But Fauci has said more testing is needed before it’s clear that the drug works against the coronavirus and is safe for COVID-19 patients.

Navarro told Fox News Channel's “Fox & Friends” that doctors in New York hospitals are already giving out the drug to COVID-19 patients and that health care workers are taking it in hopes it will protect them from being infected. And while he acknowledged the Saturday debate with Fauci, he said that the focus was on whether the administration should take 29 million doses of the drug in Federal Emergency Management Agency warehouses and send them to hard-hit cities.

“The media is trying to blow it up as a big big debate, but I can tell you that within the room the decision was a sound one, and it was unanimous," Navarro said.

Asked about his credentials for pushing the drug, Navarro cited his doctorate in social science.

“In the fog of war, we might take more risks than we otherwise would. And, given the track record of the drug over many many years in treating malaria that there are side effects but it’s been used a lot in lesser doses, the decisions’s been made by many doctors to prescribe it,” Navarro said. "If it saves lives, that’s a beautiful thing ... I think history will judge who’s right on this debate. I’d bet on President Trump’s intuition on this one.”

Trump has been enthusiastically supporting the drug, and he announced Sunday that his administration has amassed 29 million doses for distribution to areas of the country hard-hit by the coronavirus.

“There’s a study out there that says people that have lupus haven’t been catching this virus,” Trump said at a Saturday briefing on the virus. “You know, maybe it’s true, maybe it’s not. ... There’s also other studies ... that the malaria countries ... have very little of this virus.”

Administration officials say Trump's embrace of the drug stems from his desire to provide “hope” for the American people as the death toll mounts and he looks to avoid political consequences from the outbreak.

Some limited studies have been conducted on the use of hydroxychloroquine and antibiotic azithromycin in concert to treat COVID-19, but they have not included critical control groups that scientists use to validate the conclusions.

A series of 11 patients in France found that an antibiotic-malaria drug combo did not improve how fast patients cleared the virus or their symptoms. Researchers in China reported that cough, pneumonia and fever seemed to improve sooner among 31 patients given hydroxychloroquine compared with 31 others who did not get the drug, but fewer people in the comparison group had cough or fevers to start with.

At least one other world leader has followed on Trump's claims to promote the use of the drugs. Brazil’s President Jair Bolsonaro has repeatedly touted the benefits of hydroxychloroquine and azithromycin. He said he heard reports of 100% effectiveness when administered in the correct dosages, zeroed tariffs for import of the drugs and on March 30 announced army labs were ramping up their chloroquine production. On Sunday, he shared a video on social media of Trump’s personal attorney Rudy Giuliani interviewing a doctor who claimed he has successfully treated hundreds of coronavirus patients with the drugs.

Brazil’s health minister Luiz Henrique Mandetta, who has led the nation’s virus response and endorsed broad isolation measures, said on April 3 that initial tests of chloroquine’s efficacy remain “fragile.” Still, he announced the government would broaden criteria for the drug’s use in “grave” cases. Previously, it had only authorized its use in “critical” cases.

For most people, the virus causes mild or moderate symptoms, such as fever and cough that clear up in two to three weeks. For some, especially older adults and people with existing health problems, it can cause more severe illness, including pneumonia, and death.