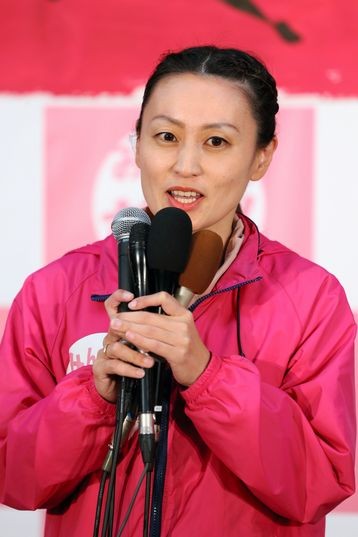 Sawako Naito thanks supporters after her victory in Tokushima's mayoral election on April 5. (The Asahi Shimbun)

Sawako Naito was an aspiring lawyer studying at the University of Tokyo, when she was shaken by a sudden attack of vertigo and leg weakness.

Naito felt as if she had risen abruptly from a chair after being spun around repeatedly while seated.

She was diagnosed with multiple sclerosis, an intractable disease.

Only a short while before, Naito had passed a test to transfer from the university's literature department to the faculty of law.

Forced to abandon her dream of becoming a lawyer and tethered to an IV drip, she began exploring other career options.

Naito entered a business contest and created a project to invite university students around the nation to submit their ideas for hometown revitalization.

After having a child, Naito served as an administrative council member and became interested in politics.

She ran in the latest Tokushima mayoral election against the backdrop of a conservative implosion brought about by Diet members.

Her inexperience initially showed in her speeches, according to a colleague of mine who covered Naito's campaign. But Naito persisted, expanded her support base and won the election on April 5.

Incidentally, "shunen" (tenacity) was the keyword she cited in a graduation essay she wrote as an elementary school sixth-grader.

But come to think of it, all this media hype over her achievement probably owes to her being a woman. That just proves how much men still rule Japanese politics.

For instance, 34-year-old Sanna Marin was elected prime minister of Finland in December, but she is the third woman to hold that post. And I understand that women form a majority in the Finnish Cabinet.

Marin herself was quoted as saying that age or sex is of secondary importance to what the prime minister will do as a politician.

Mayor Naito said she intends to go full steam ahead with "community building."

I have high hopes for this "new wind" springing up in Tokushima.