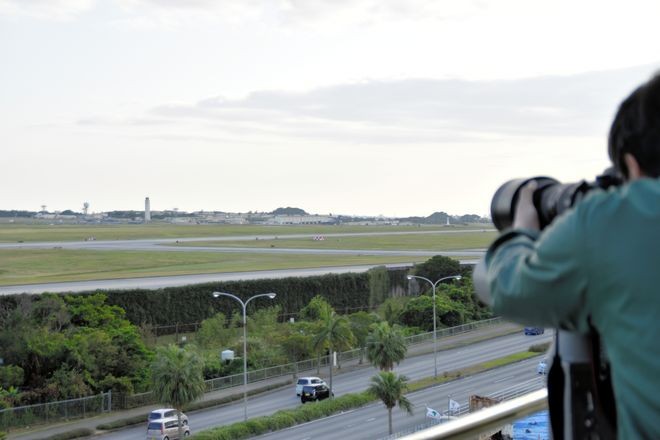 The U.S. military's refusal to reveal the number of aircraft active in Okinawa's airspace has forced the Japanese government to hire plane spotters to stake out bases to obtain data they deem vital to ensure safety.

The southernmost prefecture has seen scores of accidents caused by U.S. military aircraft based on its islands, including deadly crashes and parts falling off and landing near schools.

Numerous U.S. military aircraft and helicopters take off and land daily in Okinawa Prefecture, which hosts around 70 percent of all U.S. military installations in Japan.

The Okinawa Defense Bureau of the Japanese government uses data on noise levels and sightings of takeoffs and landings recorded by its spotters to confirm if aircraft actually flew when the bureau receives news of incidents and crashes, according to sources close to the Defense Ministry.

In 2010, spotters started visual checks at Kadena Air Base, prompted by growing complaints by residents about deafening noise levels, between 6 a.m. and 6 p.m., the bureau said.

In 2012, the bureau sent spotters to monitor the U.S. Marine Corps Air Station Futenma, when MV22 Osprey cargo helicopters were deployed there.

At first, they only counted Ospreys. But due to rising complaints about noise levels from cargo helicopters and aircraft attached to other bases, the bureau since 2017 has engaged spotters around the clock to conduct observations of all aircraft and helicopters at the Kadena and Futenma bases.

On a February weekday, two men working for a private company, which the bureau commissioned for the observation work, peered into camera finders and binoculars at a prime position overlooking the runways of the Futenma facility.

"It is going to take off,” one said, as the sound of the aircraft's propeller built to a roar before a U.S. Marine CH53E cargo helicopter blasted over them.

Spotters are on duty every day of the year. They record not only the number of aircraft they see taking off and landing at bases, but also note the times they do so and their model numbers.

In December 2019, spotters logged 1,834 landings and takeoffs at Futenma Air Station in Ginowan and 4,258 at Kadena Air Base in Kadena and surrounding municipalities in the prefecture.

The Okinawa Defense Bureau shares the data on U.S. military flights with municipal governments to keep them in the loop.

In 2018, Okinawa prefectural officials visiting Germany were surprised to learn that the U.S. military provides its internal 24-hour reports of takeoffs and landings there to committees of local government leaders.

“It is a normal thing for the U.S. military abroad to disclose the information, but in Japan they don't do it. It's definitely strange,” said one of the Okinawa officials on the trip.