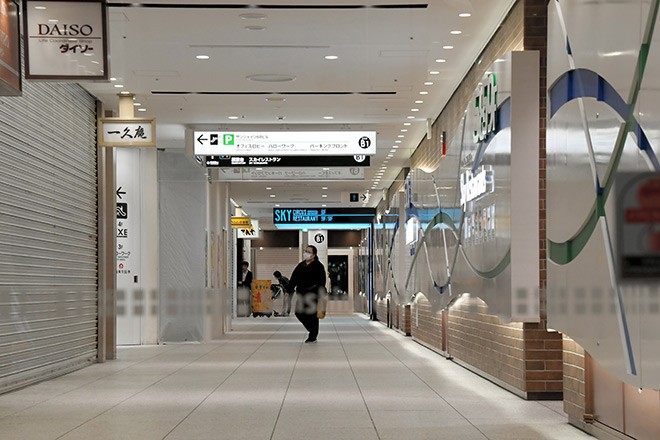 Shops at the Sunshine City building in Tokyo’s Toshima Ward are closed over the weekend following the governor’s request for residents to refrain from nonessential outings. (Reina Kitamura)

Providers of products and services deemed essential for daily life plan to stay open during the state of emergency over the novel coronavirus outbreak, but some could curtail their operations.

Governors are then expected to ask certain businesses and facilities to close down for the period, but places that provide food, medicine and other essential items and services will likely remain open.

However, some convenience stores may shorten their operating hours or close temporarily, depending on requests from the store managers.

Major supermarket chain operators also plan to keep their stores open for business after the state of emergency is declared.

Other businesses, including hotels and restaurants, will likely be partially or completely closed after the state of emergency is declared.

The Tokyo metropolitan government, for example, has already placed department stores on the list of facilities that will be asked to shut down.

Department stores have closed their doors on weekends in response to the coronavirus outbreak, but they will likely be shut down on weekdays as well.

Some department stores, however, may keep their basement food floors open on the request of municipalities.

Hotels and ryokan inns with total floor spaces exceeding 1,000 square meters may be asked to limit the use of their banquet halls and other areas. A source at a major hotel operator said the company will follow the instructions of the government.

In the restaurant industry, pubs run by the Kushikatsu Tanaka “izakaya” chain were initially scheduled to be closed between April 4 and 12, but the operator plans to extend the period in accordance with the declaration of the state of emergency.

Demae-can Co., which provides food delivery services, will keep operating its directly managed delivery hubs. Uber Eats plans to continue deliveries, but that may change depending on the contents of the declaration.

Rakuten Inc. and Amazon.com Inc. will continue their online shopping services as usual.

However, a Rakuten public relations official said there could be delays in receiving items ordered from its online shopping mall. The official also said the company expects the state of emergency to affect its logistics.

But they may reduce the number of service counters available, depending on how the situation develops, a public relations official of MUFG said.

Japan Railway companies share the basic view that they should avoid reducing the number of train services as much as possible.

An official of East Japan Railway Co. said the company is unlikely to suspend all train services because a certain number of trains must be running to keep cities functioning.