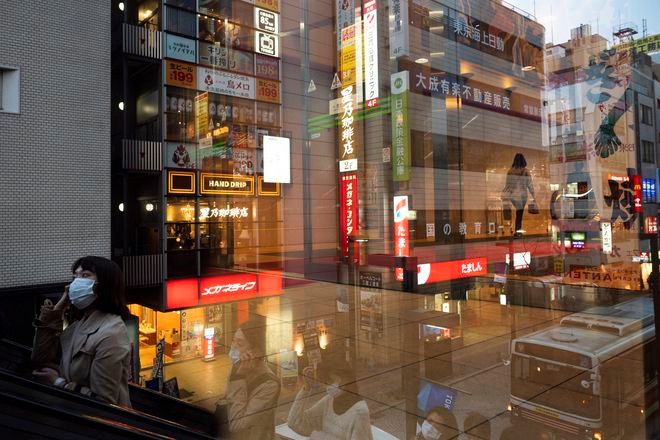 People ride an escalator up toward a train station on April 7 in Tokyo.

Japan will sell a record amount of extra bonds this fiscal year, worth more than $165 billion, straining the industrial world's heaviest debt burden, as Tokyo compiles a record stimulus to combat the coronavirus.

Prime Minister Shinzo Abe on Tuesday rolled out a package worth 108.2 trillion yen ($990 billion), or 20% the size of the economy, vowing to take "all steps" to combat deepening fallout from the virus pandemic.

"In a crisis like this, Japan has little choice but to embark on helicopter money like other major economies," said Yasuhide Yajima, chief economist at NLI Research Institute.

Finance Minister Taro Aso told reporters that the government was placing higher priority on trying to revive the economy than restoring public finances.

All the maturities, except for 40-year bonds, inflation-linked bonds and liquidity enhancement auctions, will increase.

While 40-year bonds and liquidity enhancement auctions remain unchanged from an initial plan, inflation-linked bonds will be cut. Six-month treasury discount bills will be added to the market issuance.

In a rare move, the government on Tuesday compiled an extra budget worth 16.8057 trillion yen at the start of the new fiscal year in April to fund the stimulus, highlighting the urgency.

The government will issue the same amount of extra bonds to fund the extra budget, the largest amount on record, with construction bond issuance at 2.3290 trillion yen and deficit-covering bonds at 14.4767 trillion yen.

The number of coronavirus infections exceeds 1.32 million globally, with 74,087 deaths. Japan has so far been spared the massive outbreaks seen in other global hotspots, but a recent, steady rise in infections prompted Abe to declare a state of emergency in Tokyo, Osaka and five other prefectures.

The pandemic has added to woes for Japan's economy, which is seen in being in recession as the outbreak disrupts supply chains and cools consumption. The 2020 Tokyo Summer Olympics have been postponed.

The Group of 20 major economies pledged last month to inject more than $5 trillion into the global economy to limit job and income losses. ($1=108.8000 yen)