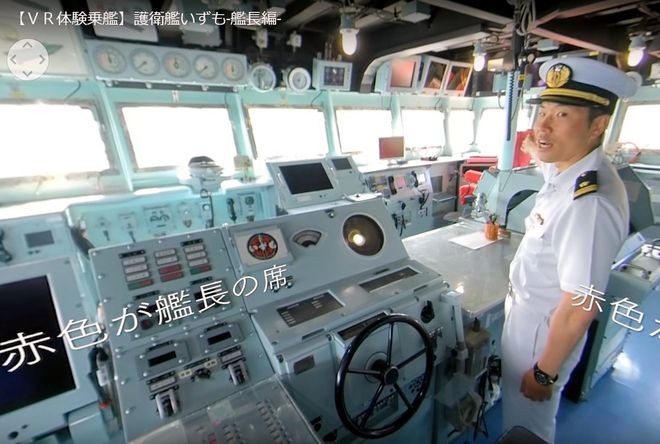 The Maritime Self-Defense Force has turned to YouTube to revive its struggling recruitment drive after the novel coronavirus outbreak forced the cancellations of tours aboard the Izumo destroyer.

The MSDF uploaded four three-minute videos on its official YouTube channel in late March, providing 360-degree views of inside the helicopter-carrying destroyer, as well as the 250-meter-long deck, mess hall, sleeping quarters and other areas.

“The materials feature scenes that can rarely be viewed, making people feel like they are the captain of the Izumo,” said Yusuke Kito, head of the public relations division of the MSDF Staff Office. “I especially want young individuals to watch the videos and learn about how MSDF service members work.”

Demonstration rides and other events targeting potential MSDF recruits have been called off during the new coronavirus pandemic.

In late February, the Defense Ministry began canceling or postponing functions involving third parties, including events organized at SDF bases across Japan, to prevent the spread of the virus.

The MSDF, which deems those opportunities “a chance for enlistment,” was alarmed by the decision because it normally opens booths at such venues to show visitors what MSDF work is like and how they can serve their country.

The MSDF already faced recruitment difficulties before the new coronavirus started to spread.

In fiscal 2018, the MSDF was able to employ only 59 percent of the planned number of recruits, a ratio lower than those for the Ground and Air SDFs. Many young people are apparently reluctant to join the MSDF because the duties require personnel to work for long periods at sea far from home.

Despite the staff shortage, the MSDF is covering a far wider range of operations, such as surveillance missions for Chinese vessels navigating near Japanese territorial waters and standing by for missiles launched by North Korea.

In addition, an MSDF destroyer was sent to the Middle East this year.

“We have more tasks at hand but fewer people have come in,” a senior MSDF officer said. “The situation is tough given that we cannot organize recruitment events.”

Struggling to overcome the recruitment difficulties, the MSDF floated the idea of offering videos online so that those interested in serving can take “virtual” rides on the destroyer.