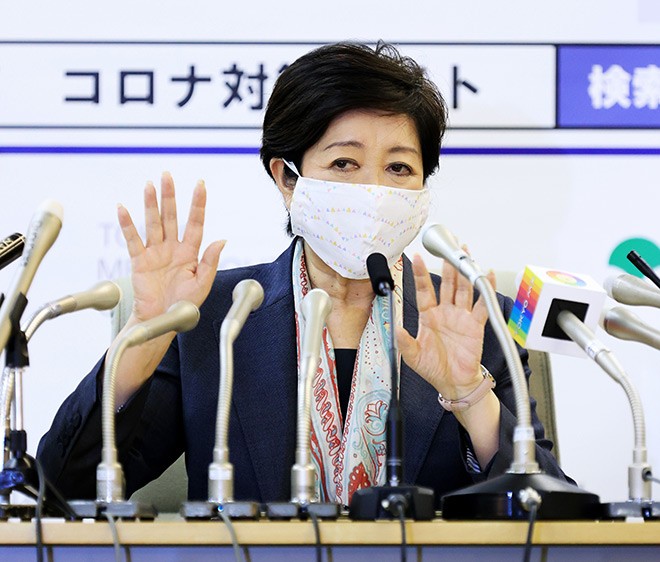 As governor of a metropolis of 13 million people, Tokyo's Yuriko Koike was under pressure to name specific business categories and facilities that would be asked to suspend operations immediately after Prime Minister Shinzo Abe issued a state of emergency over the COVID-19 pandemic on April 7.

But the carpet was swiped beneath her feet by none other than the central government.

Instead, Koike was only able to announce at an emergency news conference on the evening of April 7 that Tokyo “will keep carrying out adjustments in tandem with the central government.”

It was a harsh blow, given that Koike had led the charge in warning that Tokyo could be faced with a "lockdown." She cautioned in late March that the next three weeks would be critical in deciding whether to take such a drastic step.

The targeted businesses and facilities were divided into three groups: those to be asked to close, ones to be asked to close depending on the type of enterprise and those deemed necessary to continue operating to maintain some sort of normalcy in these trying times.

Officials used three criteria--“high-density, closed environment and close contact”--in drawing up facilities that would be affected.

News media gave wide coverage to the reported plan, prompting some facilities and educational institutions to decide to close ahead of Abe’s declaration.

Talks between officials of the metropolitan government and the central government quickly ran into quicksand.

The central government frowned on the plan, saying what Tokyo had in mind was “too strict,” sources close to Tokyo officials said.

The central government appeared particularly reluctant to include izakaya-style restaurants, department stores and outdoor athletic facilities in the list.

Because of that, Koike’s news conference was delayed into late evening and she was not in a position to name specific facilities and business categories.

Koike said the metropolitan government will clarify the situation with a specific announcement on April 10 stating which business and facility categories will be requested to suspend operations from April 11.

“There was too big of a discrepancy between (us) and the central government,” said a key source.

Responses from each governor varied.

“I don’t see the necessity of asking businesses to shut down their operations,” Kanagawa Governor Yuji Kuroiwa said at a news conference.

He earlier expressed his intention to move in step with Tokyo in terms of detailed measures, but then said, “Businesses will not accept such a request unless it comes as a package with compensation.”

Osaka Governor Hirofumi Yoshimura, on the other hand, urged residents to, “Stay away from entertainment districts at night.”

After the central government released its guidelines, Yoshimura said the prefectural government will not restrict the use of facilities.

However, if the virus continues to rage unchecked in late April, he said the prefectural government will request operators of movie theaters, athletic facilities, bars and karaoke parlors to suspend their activities.

Osaka officials were also frustrated with the central government, which did not release the national basic guidelines until around 5 p.m. on April 7.

“I wish the central government would have discussed details about the targeted facilities with the prefectural government,” an Osaka official complained.

Hyogo prefectural authorities asked residents to refrain from going to restaurants and nightclubs that operate from nighttime to early morning, as well as karaoke parlors.

But the prefectural government stopped short of requesting that they shut down such facilities.

Fukuoka Governor Hiroshi Ogawa lobbied from before April 7 to have his prefecture subject to a state of emergency, adding that he planned to “make various requests.”

In the end, it took longer than expected for Fukuoka prefectural officials to set up task force meetings and hold a news conference after Abe’s proclamation.

“It was difficult to make big decisions that require the suspension of private businesses to take effect from the following day,” a prefectural official said.

Ogawa said at a news conference that he would request private business entities to limit the use of facilities and suspend operations “if necessary.”