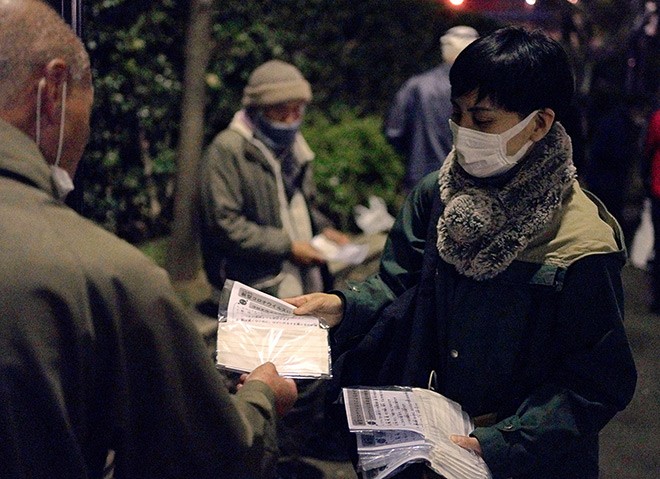 A homeless man in his 60s sat on a flattened cardboard box in a park near the Sumidagawa river in Tokyo and covered his mouth with a dirty face mask.

“I use it very carefully because I have no idea when I will get another one,” the man said in early April.

It was one of two masks he received a month earlier from a group that provides assistance to homeless people.

They are at greater risk of developing severe symptoms or generating cluster infections, and they are running out of food, protection from the virus and places to stay.

Support groups warn that the economic fallout from the coronavirus outbreak could place others in similarly vulnerable positions if they lose their jobs and homes.

Homeless people are well aware that the potentially deadly COVID-19 disease has spread across the country.

The man by the Sumidagawa river owns a radio that broadcasts daily reports about the health crisis as well as instructions on staying safe, including wearing face masks.

He said he picked up two other masks off the ground and that he washes them with soap every day at a park faucet.

“Even though I am in this position, I want to be cautious since everyone in society is also being careful,” he said.

However, another homeless man in his 70s in the same park had no mask. “I have difficulty breathing when I wear one,” he said.

Tenohasi, a nonprofit organization based in Tokyo’s Ikebukuro district, and Medecins du Monde, an international nongovernmental organization, had been distributing three face masks each to homeless people in Tokyo from mid-March. But that number has now dwindled to one.

“We want to distribute as many face masks as possible since the spreading of infections could be prolonged,” said Kenji Seino, Tenohasi’s secretary-general. “But we are facing difficulties obtaining new face masks, and I am worried there will be a shortage.”

Prime Minister Shinzo Abe on April 1 announced a plan to distribute two cloth face masks to every household in Japan, saying the measure would be “extremely effective” in dealing with the shortage of masks.

The washable and reusable masks will be distributed to the post boxes of each household, meaning that those with no fixed address, such as homeless people and people who regularly spend nights at internet cafes, might not receive the masks.

Atsuko Imagawa, 56, an internal medicine doctor who also heads Aisle, an organization that provides support to the impoverished, said homeless people are at serious risk from novel coronavirus infections.

She noted that homeless people tend to gather and sleep in certain districts, raising the possibility of cluster infections.

“It may be difficult to realize when the homeless become infected,” Imagawa said. “Many have pre-existing health problems so there is the possibility their symptoms could quickly become very severe.”

Local governments have asked that residents avoid large gatherings or suspend plans for such congregations to prevent the virus from spreading.

Groups that have regularly offered meals to homeless people have reduced or suspended their operations because of such measures.

In a different park near the Sumidagawa river, weekly meal services stopped in late March.

“I don’t know what to do,” said a man who has depended on that service. “It will be difficult for both my hunger and mentally.”

Abe’s declaration of a state of emergency on April 7 has also prompted some businesses to shut down operations. Many people without homes spend the night at inexpensive internet cafes, but these places are being targeted for closure.

A homeless man in his 60s who roams around the Ikebukuro district often spent his nights at a family restaurant when it got very cold. However, many of those restaurants have decided to close their doors from late at night until the next morning.

On the evening of April 8, he received a rice ball and bread from a support group. He asked the group members about where he should stay at night from now.

Aisle’s Imagawa said: “If the economy worsens due to the coronavirus outbreak, everyone could find themselves in financial difficulties. I hope there is a spread of understanding about the need to provide indiscriminatory support and not consider this to be a matter that only concerns others.”

Six organizations that provide support to those facing financial difficulties have asked the Tokyo metropolitan government for greater measures in securing housing. The groups said they are concerned about a rapid increase in the number of people who will lose their homes during the pandemic.

The metropolitan government has included 1.2 billion yen ($11 million) in a supplementary budget to pay for about 500 residential units and hotel rooms as a temporary housing measure.