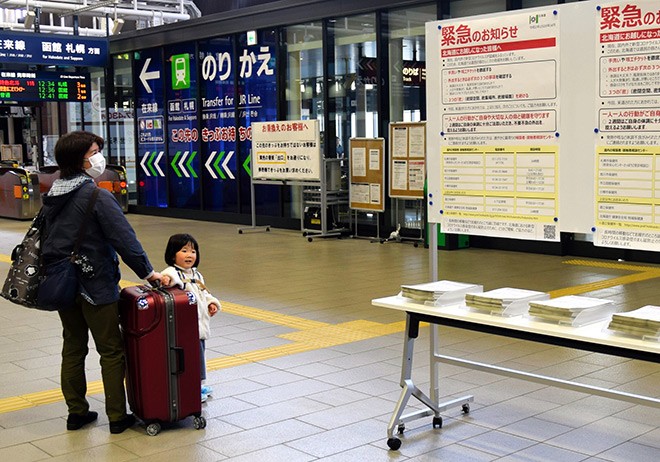 An emergency notice at Shin-Hakodate-Hokuto Station in Hokkaido on April 8 asks visitors to the island to self-isolate for two weeks. (Kazuya Miki)

Local leaders are sending a message to people in coronavirus-hit areas that have been placed under a state of emergency: Please stay away from us.

Worried about reports about streams of residents fleeing such hot spots as Tokyo and Osaka, prefectures unaffected by the declaration of the state of emergency are trying desperately to prevent new coronavirus infections from spiking among their residents

However, some residents who are leaving their areas say they have no choice because the state of emergency is closing services that they need to continue with their work.

Prime Minister Shinzo Abe on April 7 declared the state of emergency for Tokyo and the surrounding prefectures of Kanagawa, Saitama and Chiba, as well as the prefectures of Osaka, Hyogo, and Fukuoka in western Japan.

The following day, Hokkaido government officials began putting up posters and handing out fliers at key gateways, including New Chitose Airport, to try to stem the flow of visitors to the northernmost main island.

“We are trying to send the message that you should not visit Hokkaido for now unless it is absolutely necessary,” a Hokkaido official said.

For those who do arrive from the seven prefectures under the state of emergency, the posters and fliers urge them to self-isolate for two weeks.

At one point, Hokkaido had the most coronavirus infection cases in the country, prompting Hokkaido Governor Hiromichi Suzuki to issue a local state of emergency on Feb. 28 to contain the spread.

For three weeks, residents were asked to refrain from going out on weekends.

The measures apparently worked, and Hokkaido managed to fend off a spike in new cases.

But recently, visitors from Tokyo, now the nation’s leader in coronavirus infections, have tested positive for the virus.

“We want people to refrain from visiting, especially those who casually think, ‘I don’t feel well, but I want to go to Hokkaido and have fun,’” Suzuki said at a coronavirus task force meeting on April 7.

“We are requesting people in the seven prefectures not travel to other areas,” the governor said in a statement.

Iwate is one of only three prefectures in Japan that has reported no coronavirus cases as of April 8.

Tasso also recommended that residents in Iwate Prefecture avoid nonessential travel to areas under the state of emergency.

Leaders of municipalities not far from the greater Tokyo area have also voiced a sense of alarm.

He asked that people in the seven state-of-emergency areas to remain there.

“We cannot accommodate the so-called evacuation from the coronavirus in light of the current circumstances,” Fukuda said.

The welcome mat was also removed in prefectures near high-risk urban areas in western Japan.

Ikuo Kabashima, governor of Kumamoto Prefecture, which neighbors Fukuoka Prefecture, urged people living in the seven areas to refrain from coming to his prefecture.

The governors of Aichi, Mie and Gifu prefectures, which are located between Tokyo and Osaka, made a joint emergency appeal on April 7, pleading with locals to avoid visiting the seven areas.

They also urged residents to tell their relatives, friends and business associates in the targeted areas to refrain from nonessential travel to those prefectures.

Okinawa Prefecture asked vacationers from across Japan not to visit despite tourism being a key source of revenue for the southernmost prefecture.

The island prefecture is ill-equipped to deal with an outbreak of the virus. The prefectural government said its hospital beds for infected patients are already nearly full.

“Our top priority is to protect the lives and health of local people,” Governor Denny Tamaki said.

Some municipalities were more accommodating.

The mayor of Karuizawa, a renowned summer resort area in Nagano Prefecture, not far from the capital, said he will welcome people who want to stay at their second homes in the town.

“After all, those are their vacation homes,” he said. “They are entitled to relax there.”

He said he hopes tourists from the Tokyo metropolitan area and elsewhere stay home but would not say “no” to their visits.

Some people who moved out of the hot spots temporarily say they have no choice.

A 40-year-old company employee in Tokyo visited her parents’ home in Shizuoka Prefecture on April 8 despite knowing about local government requests against such travel.

She brought along her 3-year-old daughter.

The mother said nursery schools have been closed in Tokyo since the number of infection cases surged, and she had to turn to her parents for help because she and her husband could not take leaves of absence from work.

She said she plans to work at her parents’ home while taking care of the daughter with their help.

“I will be careful not to contract the virus by avoiding crowds,” she said.