Taxi driver becomes fluent in English, but few around to chat now 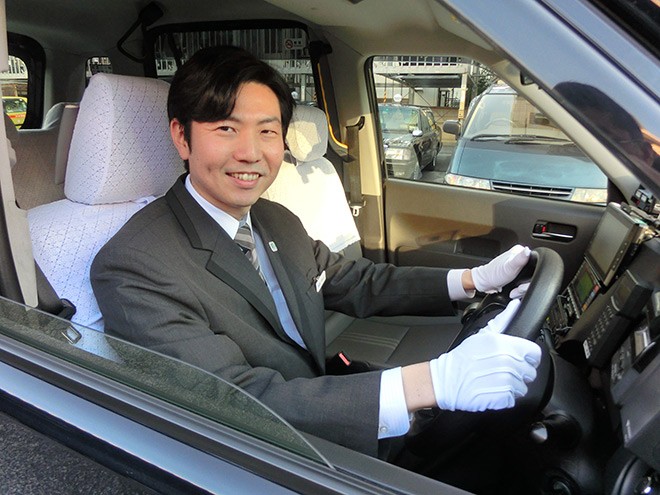 Tetsunari Nakayama, a taxi driver in Tokyo, has taught himself English. (Manabu Ueda)

A Tokyo taxi driver taught himself to become fluent in English from scratch over four years, ahead of the Olympic Games.

But since the new coronavirus outbreak has devastated the taxi industry and delayed the Tokyo Olympics by a year, he is left with few foreigners to drive around.

“I regret that I have little opportunity to speak English at work now,” said Tetsunari Nakayama, 36. “I hope that the infection will be contained soon.”

Right after the Tokyo Olympics bidding was successful, his company, Yayoi Kotsu Co., urged its drivers to improve their English skills.

He began studying English right away, at 30, thinking he could be ready in time for the Olympics. Knowing the meter was running, he buckled in and proved himself right. He will have to wait another year before ferrying foreigners to matches, with the Olympics pushed off until 2021.

The studious cabbie does not regret his hard work and has even recently published teaching materials to help others follow in his footsteps.

With only a high school education and having never studied abroad, he acquired an entire language over the course of just a few years.

“The last time I went abroad was for a family trip, when I was a junior high school student,” he said.

Despite that, he taught himself to become fluent enough to speak with his passengers in English without hesitation.

“You can speak English better than my bilingual colleague,” one of his passengers remarked.

Language learning is a recent passion for Nakayama.

After graduating from the high school, he worked as a part-time worker with an aim to become a musician. But he had no chance to become a professional one, and then he tried to become a novelist. But he realized that he had no talent for it.

Then he started his job as a taxi driver at 29, and at that point had “no English-speaking skills at all.”

Nakayama said he found a few things to be the most effective for learning English.

They include reading interviews aloud from articles in magazines and reciting lines from films and dramas.

He would jot down important expressions in his notebook. He made recordings of himself speaking in English and listened to them repeatedly. While doing so, he would echo the words aloud.
a
“Listening is the most difficult because English speakers do not care if you understand what they are saying,” he said.

“If you learn many expressions and can speak English, your listening skill will also improve.”

Nakayama thinks he dramatically improved after using a free website where he taught Japanese to native English speakers and, in return, he learned English from them.

Every time he finished an online lesson, he reflected on how to use better expressions, and then reviewed the lessons in full.

“Every day I enjoyed the lessons and, naturally, I improved my skills greatly.”

The quick learner put his advice into writing, publishing an instructional book in September on his experiences and methods for studying English.

In October 2018, he competed in the “English Omotenashi (hospitality) Contest,” held by an industry group, where contestants were judged on how hospitable they were in providing taxi services to foreigners.

“Many Japanese hesitate to make mistakes because they are ashamed of it. But I don’t care,” he said, explaining how his care-free attitude helped him perform so well.

The contest Nakayama participated in can be watched at the following YouTube site (https://youtu.be/13vUs7TNnto).