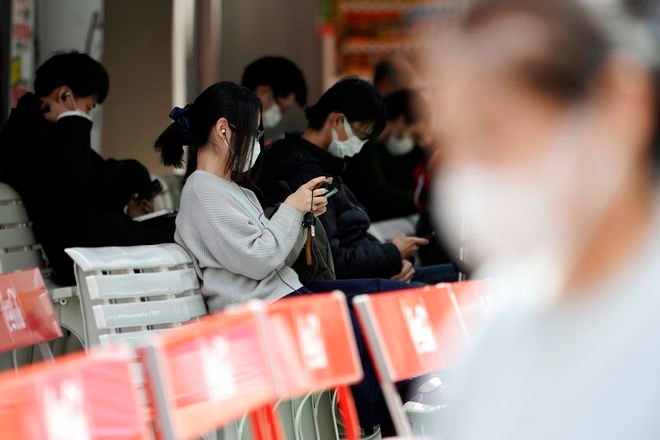 People with protective masks wait at a bus station on April 9 in Tokyo. (AP Photo)

Four prefectures under a state of emergency each reported a record high number of new coronavirus cases on April 9, while Shimane Prefecture had its first positive test.

Overall, Japan had 575 new confirmed infections on April 9, bringing the total number to 5,448, excluding those on the Diamond Princess cruise ship and cases confirmed at airport quarantine offices.

The four prefectures with a record number of new cases were Tokyo with 181, Osaka with 92, Hyogo with 39, and Saitama with 35.

The three other prefectures under the state of emergency declared by Prime Minister Shinzo Abe are Kanagawa, Chiba and Fukuoka.

Close to 70 percent of the new cases in Tokyo, or 122, were individuals whose infection route was unknown. There were also reports of students enrolled at universities in Tokyo testing positive for the virus after they returned to their family homes in Ibaraki and Toyama prefectures.

The 92 cases in Osaka nearly doubled the previous daily high of 53.

Hokkaido officials said one employee and eight senior citizens at a facility for those with dementia were confirmed infected with the coronavirus on April 8 and 9.

One of the residents, a woman in her 70s, died from COVID-19, the disease caused by the novel coronavirus, Hokkaido officials announced on April 9.

Hokkaido Governor Naomichi Suzuki said at his April 9 news conference that he had submitted an urgent request to the central government to implement more thorough measures against travel. Individuals from the seven prefectures covered by the state of emergency who have obvious symptoms, such as a fever, continue to enter Hokkaido, local officials said.