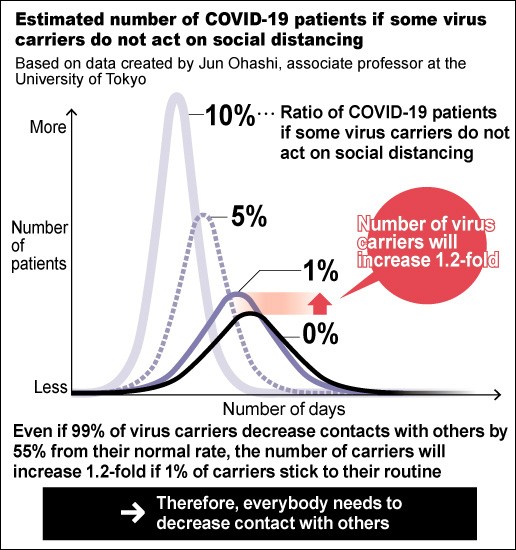 But they also agreed with his remark: “It is no easy task.”

The social-distancing plan to halt the increase in COVID-19 cases will require the efforts of everyone, particularly those who have been infected, the experts say.

After declaring the state of emergency for Tokyo and six prefectures, Abe insisted the “basic premise (for social distancing) is to get out of the emergency situation in a month.”

Experts quickly backed the rationale behind the target, saying such extreme social distancing will work if everyone works toward that goal.

But they said that even if 99 percent of virus carriers keep their distance from others and cut the opportunity for contact by 55 percent from normal levels, the number of new cases would still increase if the remaining 1 percent do not change their behavior.

ESTIMATE WITH A ROOM FOR MARGIN

Abe’s strategy for the public was based on a “cluster infection” calculation made by the health ministry’s panel.

Hiroshi Nishiura, a professor of infectious disease epidemiology at Hokkaido University and a member of the panel, estimated that one coronavirus carrier infects 2.5 people on average.

If virus carriers control their behavior and reduce the chances of meeting people by 60 percent from the normal rate, the infection spread will shift to a decline.

Nishiura said he studied the situation in Germany for his estimate.

He explained on Twitter that health experts know that a request from the prime minister will not change everybody’s behavior, so the government set the official target, with a room for margin, at “80 percent.”

The novel coronavirus can spread through droplets exhaled by a coughing, sneezing or talking carrier, or by face touching with hands that have come into contact with the virus.

In many cases, virus carriers do not show COVID-19 symptoms, such as high fevers and coughs, and end up unknowingly infecting others.

Experts warn that anyone could be infected, and people need to act on social distancing.

BREAKDOWN COULD BE INEVITABLE

Jun Ohashi, an associate professor of population genomics at the University of Tokyo, has run a simulation of the effectiveness of social distancing on the infection spread.

According to his estimate, up to 15,000 people will be newly infected with the coronavirus every day if everybody keeps behaving as normal.

The estimate was made under the assumption that one virus carrier infects 2.5 people on average, one carrier exists in every group of 100,000 people, and every carrier gets sick.

Ohashi’s study underlines the importance of making every possible effort to decrease the number of infections at the peak period. If efforts at social distancing are insufficient, hospitals will run short of beds and a breakdown of the health care system will be inevitable.

If each virus carrier reduces human-to-human contact by 60 percent, the virus spread can be halted, according to his study. But if that reduction is 50 percent, about 1,400 people will be newly infected every day at a peak period.

If each carrier reduces human contact opportunities by 55 percent, the number of daily new infections during the peak period will still increase but only by about 400.

However, even if 99 percent of virus carriers cut contact by 55 percent, the number of newly infected people will increase by 1.2 times if the other 1 percent of carriers stick to their usual routines.

The habits of a tiny fraction of infected people can make a substantial difference and could determine the impact and effectiveness of Abe’s social distancing request.

If people who are not infected practice social distancing and reduce the chances of meeting others, the number of new cases at the peak period will further decrease, Ohashi said.

Akihiro Sato, a professor at Yokohama City University whose work focuses on data science, has come up with specifics on how to reduce the number of COVID-19 patients, based on data released by the Tokyo metropolitan government and other prefectural governments.

According to Sato, residents of Tokyo and Fukuoka, Kyoto, Osaka and Chiba prefectures on April 7 were already in dire need of cutting human contact to almost zero percent compared with the time before the number of coronavirus cases started to surge.

The most extreme case is Fukuoka Prefecture, where residents should reduce the chances of meeting people to 1.2 percent of normal times, Sato said.

Cutting human contact to 2 percent would require individuals to conduct only one-fiftieth of their regular social behavior, movements and interactions.

Simply put, if a person used to meet 100 people in normal times, she or he should meet only two people over the same period to prevent the virus spread.

In the same vein, the frequency or length of public transportation commutes should be reduced to less than one-fiftieth, according to Sato.